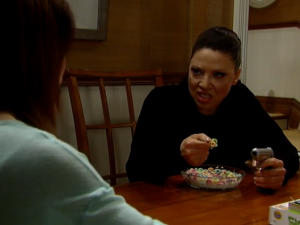 Another milestone was reached as General Hospital celebrated its 51st anniversary. Was it nostalgia at its best or did it leave viewers asking, “What was that?” It was most likely the latter the majority of the time. At least a bittersweet moment left us enthralled with tissue box in hand.

51st anniversary show.
Viewers had no choice but to believe Port Charles would ring in 51 years on a sad note when AJ’s ghost appeared to join Emily’s visit with Monica. The show has been consistent in that arena that the ghosts stay ghosts. AJ was no exception. Before Tuesday’s show got underway with anything meaningful, the show started on a confusing note of mixing real with reel as the Mayor Lomax bridge scandal was discussed amongst friends at the Floating Rib. Hopefully there is no intent to have Felicia run for mayor because they may drop the ball on that storyline like they did Scott’s as D.A. At least we see him hobnobbing with Bobbie and Lucy. The discussion between him and Bobbie about her recent breakup with Dr. Noah Drake was a bit of nostalgia that worked on the show, especially given the fact that Noah was seeing Anne Logan. Monica’s dialogue entering General Hospital to be with her deceased son, AJ, was emotional and she had me crying while I hoped a more useful ghost than Emily would tell her who killed AJ, or Connie for that matter. It wasn’t a long wait when ghost AJ appeared and I loved how he was pleasant and whole. Unfortunately for a ghost, who killed who was too hard a discussion to have when you have to go to the other side. Lila, Edward and Alan waited for Emily and AJ before taking the staircase up into the light. Yes it was as tear-jerking as when Edward passed. Among the dearly departed, it was noted by viewers that Jason was missing. Perhaps that adds validity to what Robin was trying to accomplish.

AJ.
Yes, AJ died, and the only one truly sorry outside of his family seemed to be Carly. If Silas knew what AJ knew about what Ava had done, he’d feel pretty sorry too. We waited for the wrath of Carly who should have torn Sonny a new one, but instead of staying in the moment there was a Carlypalooza celebrating the couple over the years with guest appearances by Sarah Joy Brown and Tamara Braun. It just seemed sickening to be celebrating the couple while AJ was dead in his hospital room. As much as I love all these actresses and everything they have brought to the character of Carly and the iconic couple over the years, what the show really needed was one Carly to work this story, Laura Wright. The train of thought about what Sonny and Carly were even trying to discuss was lost as we were reminded of their four marriages and how they would do anything for their kids…like lie to Michael. Even Sonny seemed confused by the time present day Carly rejoined him in the moment. A Quartermaine montage would have been more entertaining given the circumstances. Hopefully one will follow if AJ is given a funeral send off.

Faux Luke.
This storyline couldn’t get more bizarre and need we remind the writers how we get that this is not Luke but a clue as to who and why is long overdue. In the very least, Tracy better have finally gotten a clue. She looked like she did when Faux Luke bashed Kiki but who knows. Of course by the time they return to this story viewers will have forgotten anyway, which seems to be happening more regularly lately.

Who's playing who?
Wasn't it convenient how Madeline had Silas all figured out, she even had the nerve to insult her son…and I use that designation loosely. It was questionable if he was really a cop since he played detective more with Silas and Sam than he ever had with Dante or Anna. Nate's not the only man getting played. Alexis and Sam were playing Julian, but both came clean on their motives. The best was Shawn wondering if Jordan was playing him by taking a job with Ava Jerome. Surely that was not what Jordan intended. TJ's mom is likeable but this job spelled out a long term scenario where Ava is not held accountable for what she did to Connie anytime too soon. Meanwhile, Ava appeared to be playing herself. Be real. Should viewers really believe that Ava Jerome cares about anyone else besides Morgan and herself? Right, she couldn't wait to be a bleeding heart and give Jordan a job. In a pleasant twist, Morgan wasn't going to be played by Ava but he may have his facts all wrong.

Brad and Lucas.
They're through? They were all of five minutes before he was complaining to Felix. How many individuals needed to get involved in the embryo-napping? This is just another reason this story has to end. Everyone is talking about it. It was no wonder Lulu couldn't walk through town without having a meltdown.

Not buying it.
Initially the only thing I wasn't buying this week was AJ dying, but it appears he did. All the hope that Monica faked his death to keep him alive and away from Sonny and Ava disappeared. Monica lost it and it wouldn't be too surprising if she ended up in Miscavige for a break while trying to tough it out to spite Tracy. Next, you couldn't buy Lucy's rejection of Scott. Also, not buying that Shawn wasn't thinking he should whack Carly for knowing too much. It just seemed like that would be something he'd ask Sonny. Surprisingly, one could buy Brad's concern for The Britch.

Nakamura’s murderer?
Sweet. Madeline was up to no good and Nate was there to witness it. Questions still remain if she just wants Silas to go down for Nina's murder at all costs, or if she is responsible herself. It would be nice to get involved in this storyline, (hint, hint), if they could wrap up a few others.

Hello Britta, it's mutter.
Brad asked Britt the question that she couldn't answer. If her mother contacted her, would she take Baby Ben and run? Take Soaps.com's General Hospital Poll to tell us what you think she'd do.

Julian to Ava, "Don't tell me you've been cruising the playgrounds for a new boyfriend."

Julian to Ava, "Your little bliss-fit has nothing to do with dandelions and dogwoods."

Lulu to Dr. Obrecht, "His mutter Is Lulu!"

Lulu about Nikolas, "Yes he's the white sheep of the family."

Julian to Nathan about Ava, "If she were guilty, hell I'd buy the popcorn."