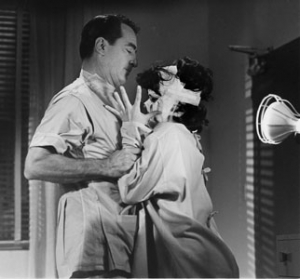 As “General Hospital” celebrates 51 years on the air, Soaps.com takes our readers back with a bit of trivia from the ABC soap opera.

April 1, 1963:
The soap was created by husband-and-wife soap writing team, Frank and Doris Hursley and premièred April 1, 1963. At the time, “GH” was only a half hour long and the couple was still writing for “Search For Tomorrow.” Writing serial dramas ran in the family and the duo wrote “GH” until 1973 when they handed control over to their daughter Bridget and her husband, Jerome Dobson. It was Bridget Dobson who later created the now defunct “Santa Barbara.” These days, Ron Carlivati head writes for “General Hospital.”

The show’s very first patient!
Angie Costello (Jana Taylor) played the show’s first patient, a “distraught and suicidal, teenager” whose face was lacerated in an automobile accident caused by her boyfriend’s drunken driving. Costello’s seen in the image with Dr. Steve Hardy (John Beradino), the Chief of the Internal Medicine Department.

The Qs.
The wealthy Quartermaine family was created and introduced by actor/writer, Douglas Marland. Stuart Damon originated the role of Alan Quartermaine and Anna Lee was the original matriarch, Lila. The family owned business ELQ Industries was named after Edward Louis Quartermaine. Incidentally, Douglas Marland would later write his own rules on how not to ruin a soap opera which he shared in a soap magazine interview.

Watch the show.
Learn the history of the show. You would be surprised at the ideas that you can get from the back story of your characters.
Read the fan mail. The very characters that are not thrilling to you may be the audience's favorites.
Be objective. When I came in to "ATWT," the first thing I said was, what is pleasing the audience? You have to put your own personal likes and dislikes aside and develop the characters that the audience wants to see.
Talk to everyone; writers and actors especially. There may be something in a character's history that will work beautifully for you, and who would know better than the actor who has been playing the role?
Don't change a core character. You can certainly give them edges they didn't have before, or give them a logical reason to change their behavior. But when the audience says, "He would never do that," then you have failed.
Build new characters slowly. Everyone knows that it takes six months to a year for an audience to care about a new character. Tie them in to existing characters. Don't shove them down the viewers' throats.
If you feel staff changes are in order, look within the organization first. P&G (Procter & Gamble) does a lot of promoting from within. Almost all of our producers worked their way up from staff positions, and that means they know the show.
Don't fire anyone for six months. I feel very deeply that you should look at the show's canvas before you do anything.
Good soap opera is good storytelling. It's very simple.

General Hospital's sweethearts.
Luke and Laura's wedding took place November 1981 and after all these years and with almost 30 million viewers, it remains as the highest watched daytime event ever. Of course the couple is no longer together today even though they're still one of the most memorable couples in soap opera history.

Daily recaps:
Soaps.com wrote their first recap of "GH" Monday August 07, 2006. In that episode, Sonny confronted the South American mob, gun in hand, Elizabeth confronted Lucky about his addiction to painkillers, and Lulu was about to get the results of her pregnancy test when she was surprised in a completely different way. GH Recap: Sonny Loses It.

Take another walk down memory lane with this Throwback Thursday GH Poll: Peddling Or Meddling?