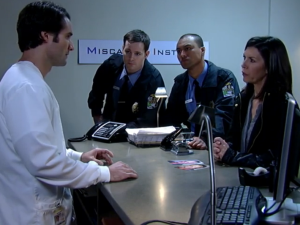 “General Hospital” Rundown for the week of February 17 – 21:

It was lukewarm in the love department as Valentine’s Day fizzled out before it even began this week, but fans got more than they bargained for as Robin tried to explain the great mysteries of her decision to leave Port Charles…a moving week if you discount the frustration of Britt’s half-hearted reveal.

Where have all the doctors and nurses gone?
There was nothing remotely familiar about General Hospital for a time there, especially in regards to the staff. Carly and Franco were treated by strangers. It would have been a good moment for Dr. Obrecht to make a cameo with an indication that perhaps a new regime change was in place. It just turned out that everyone must have taken off for a romantic Valentine’s Day just to get their hearts broken. The cold and sterile scenes were replaced with a welcoming familiarity of Epiphany and the temporarily missing Sabrina by week’s end.

Nurses’ Ball 2014.
Reality set in for viewers. We’re rounding the bend on the end of the fiftieth anniversary celebration. Lucy Coe was once again cheer-leading the cause and scrambling for funding for the nurses’ ball. This time around it started out differently. Kevin was by her side, welcoming the thought that he’d be there for her to lean on him, she wouldn’t even have to enlist the help of Scott. This year’s ball might be more exciting than last’s. It might be the perfect time for Kevin to learn about Scott, not to mention how entertaining it will be to have another one of Patrick’s women pregnant. So deja vu.

Wakeup call.
Franco really woke Carly up to the fact that he wasn’t the only one who found her. Apparently Anna and Nathan were too busy following the arrest to inquire who was posing as Heather at Miscavige. They didn’t even attempt a phone call to find out what gives…we have your yet-again-escaped patient in custody. The Heather story had more holes in it than her time of death oversight in her plan to kill Carly. Tracy could only be bothered to visit the PCPD once to report Luke missing and upon her return at the week’s end it looked like she spent her time worrying over the love of her life at the spa. Nice hair, though. At least the occasion was marked by Anna’s finest moment in detective work ever – eating a BLT in front of Heather. I was almost hoping that Anna would get trapped with Luke and Scott during the not so daring rescue with the PCPD beat cops because Nathan must have had something better to do. At least the afterword of the whole affair was entertaining with Lucy making a spectacle fawning all over Scott at the hospital. Tracy was hilarious viewing the whole situation. She was so shrewd, almost knowing what was going on between the adulterous couple.

Victor and Liesl.
Who else wants to know what went on between these two? She might have been the only one who received chocolates for Valentine’s Day. Unfortunately for Victor, all she wanted was to know about Cesar’s well-being. It will be interesting to know how close they were and if Britt is a Cassadine…although it would be weird for Nikolas.

Parenthood.
Friday's episode was heartfelt and made up for the lack of a romantic Valentine's Day showing. It was a collage of touching parenting moments. The listening, caring and sharing between the characters was moving. Silas and Sonny each trying to give Kiki and Michael advice on how to forgive or give up on the other, Julian making the kindest of gestures to Sam by making a donation in her brother's name, Olivia's thoughtfulness in looking out for TJ and Molly, and Robin's goodbye to Emma and Mac. It's enjoyable when moments like these are collected in one episode similar to holiday shows.

Britt's confession.
Could someone please shake a final confession out of that girl. Lulu, Dante, anyone? You'd think she'd be happy to gain Spencer as a son. As much as I really feel for her, it is sad that she has let this go on for so long. She could have easily suggested that maybe her mother went a step further and used Lulu and Dante's embryo. Her house of cards is going to fall in soon. Brad and Obrecht know that Britt has known the truth. This is just so sad for Lulu.

My dad's better than your dad.
How old are we? Sure, Lucas should know what he needs to know about Julian, but flip-flop Morgan hasn't been the most reliable source of information in the mob war. All of a sudden we're playing juvenile games about whose daddy is wearing the blacker hat. Surprisingly, Morgan's acceptance of his cousin's sexuality seemed out of place for the questionable character he had become after his own return to town. The writers are making this more about Lucas' relationship with his father and his crush on Brad and seem to be going out of their way to make everything politically correct in Port Charles. Dante even told Ben he'd be okay with him if he grew up to be a ballerina. The gay storyline could be more challenging; even if they think they've already been there and done that with the character before he left.

Lonely hearts club.
Without knowing it, Felix let Elizabeth come between him and Brad and in his effort to correct the situation it would appear that the realization that Brad had more secrets moved Felix to end something that already seemed dead on arrival. Felix's confession and confrontation of Brad really fell flat. It was like, alrighty then, see you at work. The story might only entertain if it's a love triangle, so here's to hoping that Brad will have to make a choice.

There can only be one. pic.twitter.com/qqoYe3gTCZ

//platform.twitter.com/widgets.js
Is Robin being selfish?
Soaps.com Editor-In-Chief Christine Fix watched the Scorpio-Drake drama unfold and weighed in on the matter. "Patrick sobbed and told Robin that what it boils down to is that Jason’s more important than their family. True, she’s putting Jason before their family - not that it’s the first time. We can all agree Emma should come first but she did have a good point that’s not easy to ignore if you’ve some compassion. She was kidnapped and thought nobody would ever come looking for her so she can’t stand the thought of Jason wishing somebody would rescue him. I can see both sides of the argument and wouldn’t dream of pretending to know who is right and who is wrong. Likely neither. It’s just a big ole mess and painful all around."

Christine is right, a big ole mess, especially since Robin has so much history with Jason. He's saved her more than once and he'd do it again. I totally enjoyed the confrontation between Patrick and Robin. The scene was filled with more passion than when Patrick came to her after making his choice. The scene between her and Emma was even more touching. Viewers must feel exactly like Emma right now…this can't be happening.

Spencer and the other kiddies:
The kids on the show have been discussed much on the message boards and while they may get a chuckle here or there, they may even be striking a nerve. Christine says, "There’s no doubt these kids are adorable. The scenes with Heather in the stables were hilarious but for many, it’s starting to feel as though the kids are taking over a little too much when fans are craving more adult interaction." Although I personally like the subtle suggestion that there is another Spencer-Cassadine war brewing among the younger generation, a little goes a long way when we're talking about Emma, Spencer and Cameron. Let us know how you feel about the inclusion of children in the storylines. Take Soaps.com's General Hospital Poll to tell us.

Felix to Brad, "Mommy Brittest stole Dante's sperm to make a baby for herself."

Felix to Brad, "If he's not even gay and he's your friend, how come he's naked in your bed?"

Franco to Kevin, "Tell me something when you took your oath to be a doctor did they call it hypocrite oath?"

Heather answering Anna, "Luke, I don't think I even know a Luke…or maybe I do. Who knows? I'm a mental patient!"

Tracy of Heather, "If I get within five feet of that bag of crazy I'm going to ring her neck."

Epiphany of Dr. Obrecht, "Do you really think that I'm afraid of Frau Doctor…Trust me, I can't wait for that woman to cross my path."

Read Soaps.com’s Primetime Dish for an update on Glee's new night on FOX.