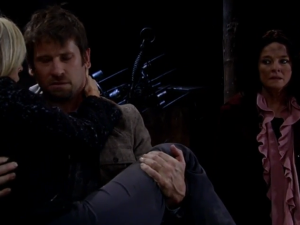 “General Hospital” Rundown for the week of February 10 – 14:

The stage was set for Valentine’s Day closing out a week of rescues, a big reveal and Julian doing the right thing, not to mention that it seems more has been cooking than just Valentine’s dinner in Port Charles. Who knew that the most intriguing bits might be a budding love triangle between Felix, Brad and Lucas?

Are you my mother?
Franco asked Heather and we wanted to know…many of us wanted to hear it was someone different. It wasn’t different, but Franco pretended it was. He proclaimed his love for Jason and professed that Alan Quartermaine was his father and Susan Moore was his mother. Heather never gave him anything and he won’t accept that she is his mother after his life was built on her lie. He and Carly could not get out of those catacombs fast enough but the scenes were fast and furious. Franco was Carly’s hero or would have been if Heather didn’t have an unlimited supply of weapons. Is there a gun and tackle shop on the shores of Spoon Island? It all ended up being very gripping and most fans who have been lukewarm themselves swayed toward supporting the mismatched couple…albeit for some, just a little bit.

Snug as a bug in a rug.
Maybe it was just the wig, but Scott and Luke’s little adventure was a bit more exciting than any that Luke had had with Laura and Tracy of late. They are quite the entertaining pair when thrown together in a scene and the scene of being locked up at Miscavige was a great diversion from the seriousness playing out in the catacombs under Wyndemere. With all the recent crime in Port Charles you’d think a missing D.A. wouldn’t go unnoticed. Does this mean we get to watch Luke and Scott put their thinking caps on to try and escape from the padded cell? Only time will tell, but it’s a sure bet it will have to be more creative than Robert and Anna escaping from Cassadine Island with chewing gum.

Circumstantial.
A lot of things hinge on circumstantial evidence down at the PCPD including Dr. Silas Clay’s current stint in lock-up. Seeing how Det. West was a big shot in the big city he came from, one would think that he had seen a lot of wills where people leave money to their spouses as a matter of course. If any real detective work were to happen, someone would have questioned Carly and realized that Luke was still missing and someone other than Heather was locked up at Miscavige. It could be Luke’s only hope since Tracy must have found better things to do after reporting him missing.

Current events.
Prince Nikolas appeared far behind the times this week. If he had spent more time with Spencer and had him searching for current events instead of for information on the Chupacabra, he might have been alerted to the fact sooner that crazy Heather Webber was loose on Spoon Island. He also could have saved a lot of time if he called the PCPD instead of walking the news there to Anna that Franco was spotted in the park and Heather was running around his island. He was savvy enough not to agree to give Britt any of Victor’s old junky Cassadine treasures at least.

All hail to the hairbrush!
Liz got the results she wanted when she borrowed Ben's hairbrush. The confrontation after the results was as exciting as the plot her and Felix devised to pull one over on Britt and Brad. Felix was subdued throughout this endeavor as well he should have been. The wrath of The Britch might ruin things for him with Brad, not to mention what Obrecht will do if she learns what went on in her lab unbeknownst to her. We can thank the relic of a hairbrush that justly ended the baby saga and now moves us into the questionable territory of watching Britt save face while trying to explain herself to Nikolas. That might be better than watching them hit the sheets.

Valentine's Day.
There were enough apologies to go around in time right before Valentine's Day but Michael was a little slow on the draw and cut off his nose to spite his face. Was Franco a good enough reason to drive a wedge in his relationship with Kiki? Not really, although one could understand the difficulty of the situation given his past with the guy, but his mother is in love with him. Michael needs to jump these hurdles and move on or he'll be spending the holiday alone. Besides wondering how it will turn out for those two, Julian's fondness for Alexis grew and we could only hope that they'd seal the deal. The big surprise was Brad and perhaps his subtle hesitation with Lucas. I'm finding this love triangle is keeping me more interested than anything that could happen between Julian and Alexis or even Nikolas and Britt for that matter. There are new developments pending in the Molly/TJ department too. Will Valentine's Day rush these two into a more intimate relationship? Over the last year Molly has grown up so much and has matured more in the ways of real love over the romantic fantasy she used to imagine for her sisters and mother.

How do I know?
Why couldn't AJ have gone to the police instead of confronting Ava about what happened the night Connie died? It's a simple matter of let the professionals handle this. AJ is no professional when it comes to his legal problems. Now he's become a drunkard again and tends to talk to dead people. Sure, Ava could probably talk circles around the PCPD, but maybe Anna could make her squirm. Ava's proven herself to be cool and calculated. Sonny better beware.

Pipedreams.
It was easy to feel sad for Morgan who is so naïve to the ways of his father's world. He just didn't get it. As much as Ava thinks she loves that boy, we all know she's quite capable of breaking his heart. All the deception that she pulled on Kiki should be proof enough that she can't be trusted. If you could hazard a guess, would you think that Ava is all in to back Sonny Corinthos against her brother Julian? Take Soaps.com's General Hospital Poll to tell us.

Best lines of the week.
The week was filled with cliches and funnies, including:

The Miscavige report on Heather, "She's snug as a bug in a rug."

Heather taking Franco hostage, "Haven't you ever heard the old saying? Never bring a knife to a gunfight."

Contractor in the catacombs, "How very uh Scooby-Doo of you."

Heather, "If it weren't for Luke Spencer and those meddling kids."

Ava of AJ, "What does that lush want with me?"

My favorite…Franco asks, "Are you my mother?"

Nikolas considering Spencer's invitation to pass on an old family relic to Britt, "With our family, you never know what heirlooms are cursed."

Through the eyes of a child, Spencer on Britt, "For Britt, I'll look at jewelry all day long…she's that awesome."

Brad of Obrecht, "To quote Frau Doctor 'The incompetent scarecrow (Commissioner Devane) can run her own tests.'"

Sonny to Morgan, "What kind of life are you going to have with your mother-in-law?"

Scott explaining his predicament to Luke at Miscavige, "I'm here for meatloaf Monday."

Luke to Scott, who's yelling, "I've always found that when you're locked up in a rubber room the best thing to do is to yell."