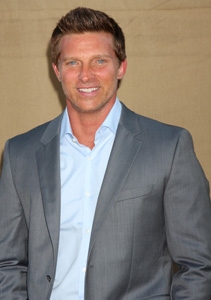 Is Burton being recast or is this Victor Cassadine’s way of getting Robin to do his bidding?

In a jaw-dropping exodus, Steve Burton left General Hospital after 21 years as Jason Morgan. The actor revealed the reason behind his departure to TVGuide saying, “I’ve been through 21 years of ups and downs with ‘GH’ — regime changes, cast and crew changes, budget cuts, shakeups of one kind or another, and it’s been nothing but a huge positive in my life and for my family. I have no complaints, no negative feelings at all. But it’s time to go. I’m going to take some time off and do nothing but relax, just enjoy life a little bit with my wife and kids. I’ve bought a home in Tennessee, way out in the country outside Nashville. [Laughs] Probably too far out in the country! I’ve been talking about leaving ‘GH’ and moving there for the last seven years. The timing was never right and then the economy crashed and I couldn’t sell my house in California. I went there many years ago when I did the movie ‘The Last Castle’ and loved it. Tennessee reminded me of growing up in Ohio. The people are nice, it’s family oriented and, now that my kids are 6 and almost 9, I want to get them planted. My contract was coming up at ‘GH’ so we put the house up for sale again and it went in, like, eight weeks. That opened the door for me to leave ‘GH’.

The actor and the studio could not come to an agreement to have Burton flown in for episodes so the actor left and turned up on “The Young And The Restless” a short time later to portray Nikki’s (Melody Thomas Scott) son, Dylan McAvoy. One show’s loss turned into another’s gain, and fans moved on but in yesterday’s “General Hospital” episode, Victor Cassadine (Thaao Penghlis) held up a photo of Jason and asked Robin (Kimberly McCullough) to help save him, alluding to the possibility that Jason is still alive and cryogenically frozen. From today’s “GH” recap, “Faison knew Jason would be an asset one day so he had some colleagues in a boat nearby drag Jason out of the water. They took him to the clinic in Switzerland, where Robin was. When Robin’s family came to rescue her all hell broke loose and Obrecht knew she had to move the most valuable patients. She dropped Robin off in Corinth, and Helena and Stavros went to Cassadine Island, along with Jason, and all three are now in suspended animation. Victor tells Robin that if she agrees to help save his family, she can save Jason too.” If Victor is serious, this could mean a recast for Jason Morgan. Soaps.com wonders who you’d like to see play the part? Feel free to comment on the possibilities.