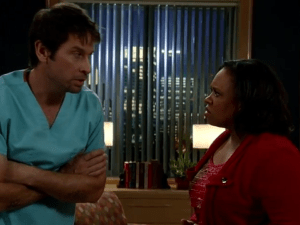 “General Hospital” Rundown for the week of January 27 –31:

This week was filled with crazy, crazier and craziest…and while someone denied themselves of unbridled passion with a former fling, another said goodbye to an old lover and close friend.

Scott…and Lucy!
They just couldn’t seem to help themselves. Maybe that was sexy. It seemed Scott must have found it sexy that Kevin turned in Franco to him for his love of Lucy. Oh, wait, that wasn’t a sexy feeling he had, that was a guilty feeling he had after almost getting caught in bed with Lucy. It was questionable if Lucy was having the same feelings of guilt though. Lucy and Scott seem to be the only two on the show who have something going on, especially now that Morgan and Ava were supposedly history. Many of the other relationships appeared to be running lukewarm.

Detective West and Lante.
It’s hard not to speculate who on earth this man was in relation to Dr. Silas Clay. There had to be a reason why he was so dead set on getting his man for this particular crime. As far as crimes go, this case was pretty cold and Anna truly had bigger fish to fry. Can they afford to have a rogue detective pursuing a twenty year old alleged crime? Plus he had time to comfort his new partner’s wife. He gave good advice to Lante though, and hopefully that will turn into one sour relationship that will sweeten up soon. Their discussion at the Floating Rib showed promise and it was the first time I felt Lulu connected with Dante since she returned from Cassadine Island.

Awkward.
If it wasn’t awkward enough that Silas told Sam that maybe Diane should represent him instead of Alexis, we had the pleasure of listening to his banter with Franco while both were in lockup at the PCPD. Ava’s exes had more in common than her. They had Kiki and the two of them somehow made her seem relevant. She wasn’t Morgan’s ex-wife, Ava’s daughter to manipulate, or Michael’s girlfriend. She was someone who believed in Franco, trusted that he wouldn’t harm Carly, and had a father to come to terms with who was kept from her by her estranged mother.

OCD vs. BLT.
Tina (guest star Chandra Wilson, “Gray’s Anatomy”) meeting Franco in Kevin’s office was a hoot and one could only imagine how much fun it would be to throw Heather in the mix. I think Tina could take her but Carly held her own after getting the lowdown on Heather’s fixation with BLTs. So Heather had daddy issues, as did Carly. The two kept finding things in common to bond over and it started to feel as if Heather didn’t want to harm Carly herself, but this is Heather we are talking about.

Chupacabra.
Setting aside the crazy moments had with the adults, there were even crazier moments with the kids. Cam, Spence and Emily set their sights on learning all they could about the Chupacabra living on Spoon Island. This was more exciting than the previous week’s attempt at a duel.

TJ and Rafe.
Less exciting was the teen scene. What a punk TJ can be. He was running around with Molly, his girl, and he still had to bash Rafe. And look at Rafe talking smack until he got into trouble, disclosing his knowledge of the warehouse shooting. Of course, Molly only had a problem with one of them, Rafe. The story of the twisted teen love story was much more exciting with Taylor hanging around. Rafe was so out of place. It's unfortunate, but these three don't seem to add up to much of a story anymore.

Robert and Anna's goodbye.
It was easy to agree with Robert's sentiment. It was a great time and we're as glad that we had this adventure together. I thought we had until February but Robert's sweet goodbye to Anna will stay in our hearts for even longer. Perhaps his new adventure will have less to do with Holly and Ethan than it will with Robin and the Cassadines…even if it turns out to be an off-screen story outside of Port Charles. I don't know about anyone else but it was easier to put up with the realization that Helena and Stavros were alive knowing that Lulu may have gotten closer to the truth about Ben. At least that is what we hope happened when she made her discovery.

Duke and Morgan.
There's nothing like trying to score lunch with the lady you love whom you lied to after beating up a gangster. What kind of a fight was that anyway where Duke came out looking all neat and tailored while Julian's face was chop suey? Duke thought he didn't have any other choice than to take care of Julian and continued on his course to join forces with Sonny. The plot thickened when Morgan did the same. It was easy to lose sight of the fact that Morgan was working for Julian to keep his family safe until that point. Duke was doing the same. Hopefully the two of them can work together with the same goal in mind. As far as the mob story goes, it continued to entertain with many falling away from the right side of the law. Everyone looks more and more desperate each week. There's no telling who will fall in the end. Alexis might fall the hardest since she definitely didn't appear to have her feet touching the ground when she left Julian's apartment after his attempt to get her vertical with his bad boy tendencies.

Shoot him!
Were you thinking the same thing when Ava threatened Julian with a gun? The man had caused enough trouble throughout the years in the Jerome family and deserved nothing more than another vengeful sister. She certainly looked desperate enough after receiving Morgan's goodbye texts. Perhaps if Ava's careful she can be more successful at staying alive than Julian. Take Soaps.com's General Hospital Poll to tell us if Julian should be immune from the wrath of Ava. What should Ava do next?