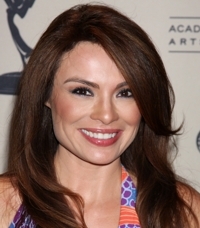 Lilly Melgar, who played “General Hospital’s” Lily Rivera Corinthos until 2003, is debuting her own skincare line, Scentual by Lilly. The line features body-scrubs, butters, roll-ons, and more. The products were originally tested at the “General Hospital” 50th Anniversary Fan Club Weekend and received a very positive response. Melgar has named some of the products, which retail between $25 – $55, after soap opera actresses such as Jade Harlow (Sheryl, “Days of our Lives”) and Michelle Stafford (ex-Phyllis, “The Young and the Restless”) and family members.

For more information or to order, please visit Scentual By Lilly.

Read about the 2014 General Hospital Fan Club Weekend. Find out details on ex-“All My Children’s” Eva LaRue’s divorce and much more through Soaps.com’s After The Soap Finales: Where Are They Now.

A ‘Schitt’s Creek’ Reunion? “I Hope We Do”, Daniel Levy Tells Jimmy Kimmel