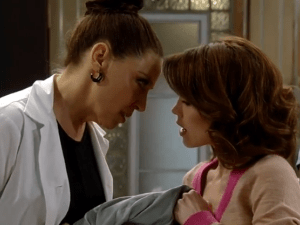 Unstable in the stable. (ABC)

It really was a week featuring the most unexpected, bizarre, and randomly juvenile scenes ever…and it’s only January.

Hail to the Chief.
There’s not much I complain about in the realm of soap opera fiction, but really, Obrecht as Chief of Staff? Both Cesar Faison and Helena Cassadine could come back from the dead next week and it would be more believable than someone from General Hospital hiring Obrecht as an employee. It was more out of left field than learning Franco was Scott and Heather’s son or that Jerry Jacks survived a fall from a balcony at the Metro Court. Granted there were some entertaining moments, like berating Brad and Elizabeth and defending Silas to Detective Nathan West. Silas was quite agreeable with the arrangement…happy to work for her provided she doesn’t kidnap any of his close family or friends. Plus there was some nonsense about contracts. Someone needs to call Diane Miller, quick.

Pretend you didn’t hear.
Wow. Sabrina started to think she was running the joint when she had the nerve to ask Elizabeth to keep her secret. Asking your best friend to zip it is one thing, asking the best friend of the baby’s daddy not to tell was just overstepping boundaries. Of course now that the nurses’ station is under the watchful eye of Dr. Obrecht, Sabrina doesn’t stand a chance of keeping her secret.

Tweedle Dee and Tweedle Dum.
Ava and Julian are the daftest individuals in Port Charles. Ava really thought she’d be able to carry on a relationship with Morgan during Julian and Sonny’s mob war. The texting was so juvenile with her fawning over pictures of the two of them on her phone. Meanwhile, Julian thought he could invite himself into the lives of his children and be a father. It’s about time that Jerry Jacks put Dr. Obrecht in charge of these two incompetent evil doers.

Love, elementary style.
The love triangle between Spence, Cam and Emily was bordering on more entertaining than whatever wasn't happening between Molly, Rafe and TJ. Maybe it was the air of mystery surrounding the happenings at the stable, or the excitement at the prospect of a duel that was less absurd than Obrecht's new position at the hospital that held our interest. Those kiddos were fun to watch, especially Emma and Heather bonding in girl power. Heather can still make friends.

Franco and Kiki.
These two are kindred spirits. Kiki has wedged her way into a makeshift family and Franco has found a way into her heart without trying. Silas was taking way too long to step up to the plate as father and Kiki couldn't help herself. She cares for Franco and would make Carly proud. Franco and Kiki remind me of Luke and Lulu in many ways.

Duke and Anna.
It was easy to predict trouble in paradise for those two, not that they've had any quality time together. She's a workaholic and spends more time with Robert. It was no wonder that Duke was out meeting with gangsters. It would be sad to see this couple go the way of Luke and Laura so here's to hoping that they can pull it together soon.

Lucy and Scott.
Kevin's a great person, but it just doesn't seem like he adds spark to Lucy's life. Unfortunately, he just seems like he's along for the ride. Scott on the other hand appears to be interested and keeps her interested.

Sonny and Alexis.
Sonny and Alexis came off as such an endearing former couple. Their friendship brought a touch of warmth to the show and made me ponder, what if they had a go at it again? Take Soaps.com's General Hospital Poll to tell us if a Sonny and Alexis reunion would be your cup of tea.

Throwback Thursday GH Poll: Not Your...