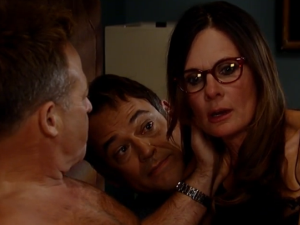 It was a week where you didn’t know if you should laugh at misplaced lovers or shake your head at Port Charles’ Keystone cops, but it was all entertaining either way.

Franco, Carly, Heather, and the PCPD.
This storyline bounced around from being all feel good like the movie “Up” and then plunged to the depths of its own Port Charles noir crime film. First I must digress…when did Carly and Franco have a picture taken together as a couple? We must have missed the episode where surreal pop music played while they skipped through the park and ate ice cream cones before stopping at the mall to have their picture taken in a photo booth. Maybe Photoshop is the new Franco art medium. What an interesting couple they’ve become. Carly and Franco are such soul mates that he knew she didn’t write the letter. He was as sure of that as the PCPD was that he killed Carly. While the great detectives debated how the murder of Carly went down, Olivia stepped out of a 1950s commercial in a Barbara Billingsley dress to support Sonny. It is quite possible that Sonny’s dimples make it hard for her to leave his side resulting in her spotty attendance record at the Metro Court where she’s about as reliable as Carly’s new security system. There seemed to be a slim chance that the soap might air in black and white by the week’s end and turn into “Pleasantville.” No complaints, it was a pleasant viewing experience after all. By-the-book Dante spent a lot of time speculating how Franco killed not-dead-yet Carly. Michael tried to help but was afraid he couldn’t ask the right questions. He certainly does a good job of it when it comes to interrogating Morgan. Another pleasant occurrence was seeing Scott Baldwin more and now that AJ Quartermaine was recalling the night of Connie’s murder, perhaps we can look forward to Port Charles having a D.A. who’s as busy as the mob leaders.

Three men and a suitcase.
That had to be one of the most disturbing scenes on a soap opera…before the suitcase in Carly’s trunk was opened anyway. It was hard to tell if it was more Hitchcock-like or Godfather-like…definitely Godfather-like. “General Hospital” was playing up the possibility of a mob hit and it worked. Bryan Craig (Morgan), Chad Duell (Michael) and Dominic Zamprogna (Dante) were superb in that scene which was a big hit for such a small scene. As much fun to watch, even though they were not on the screen together, were Maurice Benard (Sonny) and William deVry (Julian). How can they not make this mob story appealing? It’s hard not to wonder why Julian doesn’t stick to his day job because it was obvious that he sells more papers than Sonny will ever sell coffee. Plus, none of his children are involved in the mob.

Two of a kind.
That’s exactly what I said last week, except Carly thinks it was because her and Heather are both moms who love their boys. Heather had jumped the rails so it was hard for Carly to connect with Heather’s human side. Laura Wright (Carly) and Robin Mattson (Heather) were great to watch together and as crazy as this story has seemed, one might care what happens to both characters for the great acting these two are doing.

Puppy love.
Similar to the way Franco and Carly are seemingly soul mates, Sonny and Olivia are coming off as a couple married for 100 years. It looked like they picked up where Nikolas and Britt left off, because suddenly, Nikolas was following Elizabeth around the hospital, sharing how much he missed her over the holidays. Britt must have been last week's washed up news. More exciting was Lucy and Scott's love affair in her dreams when she donned the studious librarian glasses.

The truth.
It seemed more like Patrick didn't want to believe Felix when he asked Sabrina if she was pregnant. And where did Sabrina's righteous indignation go when she accepted Carlos' announcement that it was his baby? Of course Patrick may have gotten what he deserved. It was surprising that after all Robin had accomplished over the years exposing who the real daddy was, that she accepted the news that Sabrina was carrying another man's child.

Parenthood.
While Alexis Davis sounded as if she was acting counsel on "Perry Mason" in her discussions with Sam about Silas, Kiki was secure in her feelings of Franco as a father figure and someone she cares about. Scott should be less worried about how it looks to have Franco as a son since in the fatherhood department he failed on many levels. It was a certainty that he wasn't going to be scoring any points with Franco when he asked him, "What'd you do with Carly?"

Get a life, Felix.
Felix and Brad are the couple whose relationship can't get off the ground. Now the shoe's on the other foot. Brad was surprised at Felix's hospital reveal that Sabrina was pregnant. It was pretty funny considering his reveal about baby Connie in the middle of a christening. Oh…and two seconds later Brad made his own reveal in the middle of the hospital that he wasn't Ben's father. The banter between these two was better than the Elizabeth and Robin banter. It's too bad Robin and Felix were on opposite ends of the playing field because it was apparent the two of them are soul mates whose sole purpose was to right everyone else's wrong. Lucky for Port Charles there was someone who spoke the truth and his name was Brad. He had no problem calling Felix out for trying to monitor everyone's life. Do you agree? Take Soaps.com's General Hospital Poll to tell us if Brad's observations about Felix are correct.