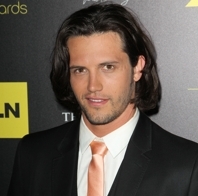 Actor Nathan Parsons (ex-Ethan, “General Hospital,” ex-Godot, “Bunheads”) is set to tak eover the role of James on “True Blood” from Luke Grimes, according to TV Line. Parsons will begin playing the role when the series returns to HBO in the summer for its final season. Grimes reportedly vacated the role because he didn’t agree with the direction the character was being taken in for season seven. He has been cast as Elliot Grey in the upcoming film, “50 Shades of Grey.”