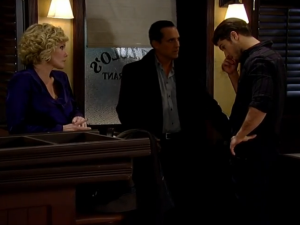 She's having your baby. (ABC)

“General Hospital” Rundown for the week of January 6 – 10:

Take your pick of reveals for the week; they were all a bit shocking, but none more so than Silas being married.

Three’s a crowd.
It was a given that Sonny was going to walk in on Ava and Morgan. The kid is just that, a kid, and a far cry from being a mobster. Ava on the other hand is as reckless as her brother when it comes to the safety of others. There is no way this mob story is going to end without some major damage being incurred in either of the mob families. Morgan better wise up before he becomes the next casualty. His serving as a mob mole for Julian has taken the drama up a notch in the mob war and things certainly haven’t fell flat between the Corinthos and Jerome mob families. The tension can be cut with a knife lately. The scenes with Sonny, Morgan, Ava and Julian are intense. There is a lot at stake for the residents of Port Charles. Julian looks more like the bad guy he is every day while Sonny is holding his own trying to keep his family strong. How it plays out with Morgan working the other side is going to be must see Daytime viewing.

There but for the grace of God, go I.
Carly really has to thank her lucky stars that she didn’t turn into Heather after her own nasty, questionable past. It wouldn’t be all that surprising if we saw Carly doing to others what Heather’s done to her, even Franco recognized that Carly wasn’t all warm and fuzzy…maybe that’s why they fit. Despite that, Carly needed to reach deep into her crazy self to survive. Maybe next week she’ll take it up a notch and best the cuckoo. All in all though, this kidnapping is one of the best kidnappings on “General Hospital” in a while. Heather was so slick running her game plan back and forth between the Quartermaine boathouse and the Metro Court. It was a little disappointing that we didn’t see her stop at Kelly’s for a BLT. It’s a given that she must stop there for grub but it would be kind of thrilling for her to sneak past Scott Baldwin between one of her wig changes.

Robin’s back…again.
This was the week’s dud moment. Everybody catching up with Robin at Kelly’s, including the undead meeting the undead when AJ arrived. It should have made headlines and been revealed to the rest of Port Charles sooner for better reactions as these recent reunions fell flat. The only upside was seeing her stroll back into the hospital finally.

You're pregnant.
Patrick wanted to know what was wrong with Sabrina and now he knows. Felix had no self-control and if Sabrina had any sense she'd have one less friend. It wasn't Felix's problem to discuss, neither was it Carlos' but this was the audience Sabrina chose to discuss her troubles with. Meanwhile, Robin started sporting an attitude when she learned of the pregnancy. Wow! The best line this week had to be when she told Felix there was no need to shoot the messenger, "You're not the one who's pregnant." This appears to be an indication that Robin is through playing nice no matter what Sabrina's intentions were. The hospital will probably need a little more sass now that Felix and Brad are on somewhat amicable terms. It's time for the ladies to get up in each other's face.

Attempted murder.
Det. Nathan West brought an attempted murder mystery with him to town to entertain Dante with after he broke Sam's heart. At least he brings the precinct a partner for Dante since Port Charles has run out of policemen.

Too hasty?
It almost looked like Sam thought she was a little bit hasty this week. Maybe she regretted sleeping with Silas but she could have regretted telling him to walk out that door too. His story was so sad…but he forgot she was a private investigator who was going to ask the hard questions, like why he was a person of interest with the NYPD. Is Silas relationship worthy of her affections? Take Soaps.com's General Hospital Poll to tell us what Sam should do.

Read Soaps.com’s Primetime Dish for information on the return of Reign on the CW on January 18.

Throwback Thursday GH Poll: What Are...