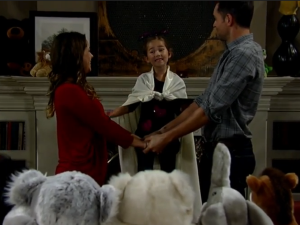 “General Hospital” Rundown for the week of December 30 – January 3:

As much as Christmas turned out to be a little droll, New Year’s Eve took us out of Port Charles without too much of a bang.

I now pronounce you…
Emma renewed her mommy and daddy by officiating over their unofficial ceremony. It was cute and momentous as viewers were treated to the couple renewing with the vows that started it all. There were touching flashbacks to the reading of the original vows. One could say it was magical or at least surprising in the fact that Felix never called Patrick to gloat that Sabrina was preggers. Pretty soon though, the recently reunited couple will have to go to work…the same place where Felix and Sabrina work. I can’t wait for that.

Maxie and Nathan.
It was amazing how Maxie couldn’t get out the door before ‘Mr. so damn close to Mr. Right’ walked through it. Nathan West was definitely everything Maxie could want in a man…he carried a handkerchief. Sure it was presumptuous of him to presume she’d consider conducting her ‘journey to me’ with him in her apartment. Maxie couldn’t waste her long goodbye to Lulu and stuck to her guns. Nathan has business to keep him busy which the viewers will hopefully be privy to soon.

Get a room.
And they finally did. Sam and Silas eliminated the possibility of any distractions and got a room. It made for a hot New Year’s Eve…the only couple with one in Port Charles. The only downside was that Silas had to mess up Sam’s gorgeous hair which was certain to be the best hairdo of the year on any soap.

No baby for you.
It seems Port Charles' stories have gone from cliff-hanging reveals to somewhat anticipated disappointment. The 'ups' for the week was the Sam and Silas hookup, but the 'downs' were definitely the Lante split. There just wasn't enough love under the fireworks to keep them together. It was sad to see Lulu leave and it's questionable if they'll ever be restored. It's obvious she can't take much more and it will be very interesting to see what will happen to Britt if the truth comes out about Ben.

Mob war.
The mob war was back on and they didn't miss a beat. If the baby wars were getting passe, the mob war at least offered a bit more drama and intrigue. No one knew what was in that file that Nathan shared with Anna but it must be good. Nathan's true motives are probably just as good too. This viewer is loving the mob storyline.

Positive.
It probably wasn't a surprise that Sabrina ended up pregnant, and no surprise that Felix was ready to call Patrick about it when Sabrina didn't. While the Falconeris were falling apart over their baby drama, viewers no doubt were wondering if they could take any more baby drama as Felix and Sabrina pondered over the results of her pregnancy test. Will another baby storyline work right now or is it too soon? Take Soaps.com's General Hospital Poll to tell us if it works.

Read Soaps.com’s Primetime Dish for information on the return of Revenge this Sunday.