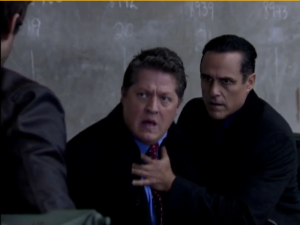 “General Hospital” Rundown for the week of December 23 – 27:

A short week but a big decision was made and there was lots of drama throughout Port Charles despite the arrival of Christmas.

What everyone was waiting for.
Patrick made his decision, disappointing Sabrina and joining Robin at home. The decision seemed anti-climactic since he visited Sabrina first and by the time he was home, it was a no-brainer that he had chosen Robin. That was the way she wanted it though since she needed to be sure he had closure with Sabrina. It was probably anti-climactic for her as well when she had to contend with Emma’s responses while opening presents on Christmas day. Sabrina gave the perfect gift. It was touching when Patrick presented her with her wedding ring.

Hiding out.
Carlos and Sabrina both were hiding out at her apartment for the holidays. She saved his life and begged for him to add insult to injury but he wouldn’t respond with an ‘I told you so’ no matter how much she wanted to suffer. Sabrina could do much worse than Carlos, even though he’s a mobster and all. He might be the most passionate man in Port Charles.

Corinthos vs. Jerome.
More exciting than Patrick’s big reveal was the mob war. The shootout action at the warehouse was incredible and so moving. It was such a surprise that Max got shot by Morgan and viewers are left wondering what this will do to Morgan. He truly showed that he cared about Max by keeping vigil at General Hospital, but where he stands with Sonny is questionable. Viewers can see where he stands with Ava, but Julian might have to take care.

Being played.
If Morgan didn’t already have enough troubles, he had to go out and make some more. It was scary the way he played Molly, and in turn TJ. He’s probably lucky there weren’t more serious consequences, but hopefully Carly or Alexis figure out what was going on and give him, and Julian, a piece of their mind.

Christmas Day.
Christmas in Port Charles was subdued this year. There wasn't much holiday cheer to be had that was shared on the screen anyway. Obrecht aptly narrated the beginning portion of the Christmas episode about little girl holiday wishes and dashed dreams, and then proceeded to bother Sonny incessantly in the neighboring cell. She sang a beautiful rendering of Oh Tannenbaum at the close of the show.

New Year's Eve.
Well the trip from Greece to Port Charles may be fast but nothing compares to the trip from Christmas Day to New Year's Eve. As Port Charles prepares to ring in the new year, many are distracted by new beginnings and baby talk. Viewers who missed the competing baby storylines of Lante and Spixie may have nothing to fear after Sabrina tossed her cookies.

A hard pill to swallow.
Britt out visiting the Falconeris with Nikolas and Ben was too hard to swallow. She didn't look pleased and could have easily played the part of Obrecht in lockup the way she looked all depressed, but it still wasn't right. Britt knows the truth but seems set on helping Lulu without coming clean. Can she keep up the charades? Take Soaps.com's General Hospital Poll to tell us if Britt will continue on as if Ben is her own flesh and blood.

Read Soaps.com’s Primetime Dish for information on the two night special event iHeart Musical Festival on the CW before the New Year.