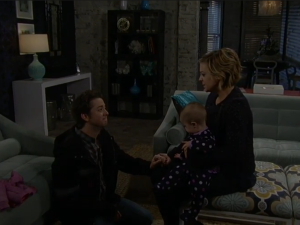 “General Hospital” Rundown for the week of December 16 – 20:

A few friends left Port Charles, the mob war escalated to actual hostages and gunfire at the warehouse, and viewers learned the truth about Ben.

My Maximista.
Monday could have been all about Maxie and Spinelli, but it wasn’t. So much more was fit into the hour on top of a touching tribute to the history of the couple. The flashback of the two over the years was emotional and heartwarming during the holiday season. It was great that Spinelli made the decision to rename their baby Georgie given what her namesake meant to the both of them.

Duke and Sonny.
Duke was getting his screen time this week in apropos fashion as he rejoined the inner circle of another mob family. For the most part, he didn’t come into play, except to agree with Sonny’s actions and to worry over what Anna would think. Seeing how Anna was keeping her own secret, his concern shouldn’t be justified.

Brad, Ben and The Britch.
Will they ever learn? The disclosure of Ben being Lulu and Dante’s was well played actually. It was questionable if the onscreen flashback told the complete story of if Britt even knew that she was carrying Dante and Lulu’s baby. Was Obrecht’s disclosure a surprise to Britt? Brad’s actions were curious this week. Ellie becoming a scapegoat seems ill-conceived at this point and Brad really needs to understand that Felix didn’t mean for him to be deceptive when he wanted him to find the embryos for the Falconeris.

Lante
This week Lulu turned a 180 on Dante and went from remorse and playing the blame game to let’s be a team…time to make another baby! That only went as far as learning their embryos were gone. We all know what General Hospital needs is another mystery on its hands…Not! Perhaps Patrick could solve this mystery while living in the on-call room before making his decision so he could just wrap up these two issues together and everybody in Port Charles could move on…characters…viewers. Seriously, it is time to move on. Patrick needs to complete his family and Dante and Lulu need Ben back before the new year. The show has too many irons in the fire and a few of them need to be wrapped up so viewers can enjoy something different, even if it is just the fallout from these reveals.

Teen angst.
It's really hard to tell if the teen angst that played out at Sam's penthouse was more about the teens or Sam and Silas. Whatever was happening between the two of them seems lukewarm when compared to the pace of everything else going on in Port Charles. The mysterious phone call and meeting that transpired between Ava and Silas was intriguing but premature unless it could have added value to any current storyline. Sam at least held our attention when she rattled Patrick's cage.

Bang! Bang!
Six men, six guns…not everyone was going to walk out of that warehouse unscathed. Knowing that your son was in cahoots with your sworn enemy should have been enough to dissuade any parent from travelling down the road that Sonny travelled. Even more disappointing was the road Morgan travelled down when he involved his cousin Molly in his deceit to get what he wanted. Sonny and Julian are grown men though. What do you think? Take Soaps.com's General Hospital Poll to tell us if Sonny went too far this week.

Read Soaps.com’s Primetime Dish for information on the return of the Cinemax series Banshee for a second season.