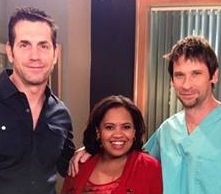 Chandra Wilson of “Grey’s Anatomy” will appear in an upcoming episode of “General Hospital” on Tuesday January 28. There’s no word on the featured storyline for Wilson except that she will be a patient of Dr. Kevin Collins (Jon Lindstrom) in Port Charles.

Wilson has played Dr. Miranda Bailey on the hit Primetime series “Grey’s Anatomy” since 2005 and in “Private Practice” in 2009. She’s also appeared in both “Law & Order” and “Law & Order: Special Victims Unit,” “Third Watch,” and “The Sopranos.” Independently, she is producing and narrating the documentary “Autism In America” which has yet to be released.

Vote to tell us who the Grinch of Port Charles is in Soaps.com’s General Hospital Poll You’re A Mean One. Watch The Stafford Project Spoiler Video which features Finola Hughes (Anna) in this weekend’s upcoming episode.

Throwback Thursday GH Poll: What Are...