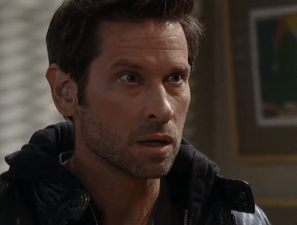 The last of the Quartermaines? (ABC)

“General Hospital” Rundown for the week of December 9 – 13:

Estranged, funny, and nostalgic sum up this week that included another return from the dead before any knew the person was missing.

I’m not dead yet.
Just when I thought I’d never look at a BLT the same way again, Heather Webber returned from the grave. It’s not certain how many viewers were thrilled to see her hand reach up to the heavens from her premature resting place but I was thrilled. After Helena and Faison, and almost Jerry, met their final demise, it was a hard pill to swallow to see Heather buried even if the whole scene was funny. It’s too bad they didn’t film it in black and white like an old horror flick with fog and rain pouring down. For a second it seemed as if Franco was going to keep her knife…maybe to go after Scott for good measure. Maybe two slayings before dinner is a job well done in the Webber-Baldwin family. Kevin just might ask him to take care of Scott for him if he ever finds out that he slept with Lucy. The funniest scene this week was when Franco found an already dug grave. That is what you call divine intervention. Did he really need Kevin to confirm that Heather’s murder was warranted? Even funnier was Franco explaining to Kevin how it was the weirdest thing that there was a grave waiting for Heather when he got her there. Everything about Heather’s non-murder was pun-filled and delightful especially since she’s not dead.

I didn’t hear it through the grapevine.
Does anybody gossip in Port Charles anymore? Half of the town is unaware that one of their most respected doctors in the community has returned from the dead. The paper must have died when Julian Jerome shed the name Derek Wells. Please, Sonny and Carly don’t even know that Robin’s alive. What’s a girl got to do on top of crash a wedding to get attention? At least Sabrina and Felix were well aware that she was back but the only people they talked to were each other.

To be or not to be?
That’s what Robin wonders about a life with Patrick. It would be nice if he weighed in on the matter but the best anyone could get from him was a pinky-promise that he’d figure it out before Christmas. That’s all good for Emma but what about undead-wife and almost-wife? He must have forgotten that he had to work with these two. Patrick seems very fickle in this area and is totally acting juvenile. He already invited both women back home, had been in a fight over Sabrina’s honor, and was now considering spoiling someone’s holiday closer to the holiday. Not cool.

Where all the action is.
So many couples and only a few that hit the sheets, a couple of which were quite questionable. What the heck? Franco's a strain on his relationship right now and Carly just wants to fix him. No fun there. Scott was lucky to score but wants to be tethered to someone. Lucy was so fickle. Scott had to have known she'd run back to her 'Doc' the first chance she got. Even if he waits for her to screw things up, perhaps they shouldn't be together since they've been there and done that. It might be nice if he and Diane had a go at it between trials though.

Who ordered the egg salad?
Things were just warming up at Wyndemere now that the hostage situation is resolved. It was safe enough for the kids to come home and seemed that the only thing making it a hostile environment was Elizabeth's presence when she dropped them off and the delivery of Heather's Egg Salad Sandwich painting to PK Sinclair that Faison ordered. Nikolas was so cute standing up for Britt. He's such the silly fool but they make the cutest couple. It's still easy to find favor with Britt after overcoming her family difficulties.

Have a holly, jolly Christmas.
Friday really set us up for next week. Everything started out so warm and fuzzy from Spoon Island to Port Charles but the sense of dark things to come was present. Hopefully the coming days will be like an advent calendar, answering some of the viewers' unanswered questions. Would it be too much to ask that it be Britt's never ending confession. Will it ever end? Let's hope so.

Where have all the Quartermaines gone?
The family seems on its way out. It really is a shame since there was so much hope earlier when Franco returned as a Q and Michael has finally shown interest in his true heritage. Watching the Quartermaines this week left me empty and longing. There has been more warmth on Spoon Island than in the Q household. Tracy + Luke does not equal Quartermaine. Perhaps we should learn that Heather was lying for some more bizarre reason and re-add Franco back to the family tree. At the very least, Tracy has to set aside her differences and get Michael to step up to the plate at ELQ. Whatever happens, it would be nice to see them rebuild this family in some way. What do you think? Take Soaps.com's General Hospital Poll to tell us if the Quartermaines are important to Port Charles anymore.

Read Soaps.com’s The Vampire Diaries Recap: Fifty Shades of Grayson to find out why Katherine turns to Matt for help in the mid-season finale.