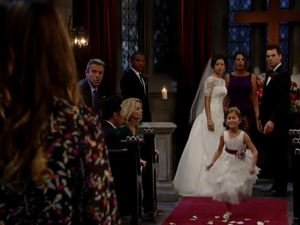 “General Hospital” Rundown for the week of December 2 – 6:

They made up for the short holiday with a super post-holiday Monday show that propelled us into a week of incredible drama.

Make it to the church on time.
And the point of that was? She made it! She made it, but she didn’t say anything. Most viewers probably pulled their hair out. Yes, it was a long wait and it did take until the end of the episode for Robin to get noticed, but it was great. It’s too bad Robin’s funeral couldn’t have been as nice. The church in Port Charles is still creepy but a church is all about the people and they came together for Sabrina, Patrick and Emma in a beautiful way. Later, they all gave it up for Robin. Emma was too cute for words and it was so moving when she wondered aloud when it would be time for Robin to go back to heaven.

That would be a no.
Good for Robin for not obliging Patrick’s needs above her own. It was refreshing to hear her turn him down as he stood there befuddled after the wedding. She doesn’t need to hear how confusing things are for him and how he just wants to go home and have them under one roof. Why should Patrick have time while poor Robin is expected to suck it up because she knew she was alive? She was held prisoner for two years in unimaginable circumstances and now she has to consider Patrick’s needs over her own. Pffft! I think not. He needs to call her when he has it figured out, which will be no time too soon considering he later asked Sabrina to come home.

Hi ho, hi ho, it’s off to work we go.
After the emotional stress of a wedding that didn’t go off without a hitch, (or go off at all actually), and the shocking discovery that your dead wife was alive, the first thing you do is? Go to work? Perhaps it was okay for Emma to go back to school. Kids need routines. However, Patrick going back to work was odd. There are two women who need desperately for him to sort things out. Granted things will take time, but a person has to start somewhere and that somewhere shouldn’t be at General Hospital buried in work that can wait until you were expected to get back from a honeymoon anyway. Maybe there’s a stipulation in the hospital handbook that outlines protocol for such things upon the return of a presumed-dead wife in the middle of a wedding ceremony. It’s a common occurrence in Port Charles. The man could hardly get an ‘I do’ out during his wedding, it’s hard to figure that he’d be able to pull it together to go to work. If Patrick intends on hanging around the hospital while he sorts things out, he better hang around outside of Kevin’s office. There surely is some time on his schedule to cancel another appointment with Lucy to handle Patrick’s troubles.

Spit it out already.
Taking just as long, but maybe not as annoying as the wait for Robin to come home and break up a wedding, is Britt skirting around the truth. Girlfriend better spit it out before Nikolas finds out another lie on his own. She should reveal whatever confession it was she was trying to make while they were in captivity because soon there will be too much to lose after reining in the prince.

Sam.
While everybody else was having issues with getting the words out, Sam let the name Lucas fall from her lips while arguing with Julian. Lucas may have to scratch her off his Christmas list this holiday season. We haven't seen Sam and Carly light up the screen with one of their fights in a while. Here's hoping that Carly learns about Sam's transgression first and gives her hell for it.

Carlos.
Here's another man who can't find his shirt. Here's to hoping that he's related to Sonny so viewers can make a toast to Carlos' ability to stay alive in Port Charles and further indulge us. The man is quite the gentleman in a Rhett Butler kind of way.

Two out of three ain't bad.
Viewers didn't see it go down but it was heavily implied that Anna and Robert snuffed out old Faison on Spoon Island. He was a crafty sort so for their own safety it was understandable that they took the precaution to finish it off themselves. Meanwhile, it was of great concern to me when Luke and Jerry fell from the top of the Metro Court. Not concerned for Luke so much, but Jerry? We couldn't lose all of Port Charles' greatest villains in one fell swoop. We were left with an air of mystery as Julian saved his "old friend" Jerry who he's betting on to pay him back in some manner in the future. What do you think of the recent round of death and retreats? Take Soaps.com's General Hospital Poll to tell us if losing a few villains is a good thing or not.

Read Soaps.com’s The Vampire Diaries Recap: The Cell to find out what Elena learned about her family.

Throwback Thursday GH Poll: You Are...