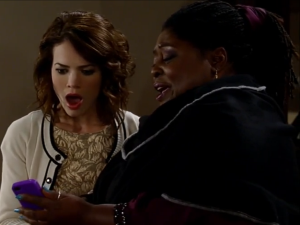 “General Hospital” Rundown for the week of November 25 – 27:

This week was short, suspenseful and oh so sweet.

“I am Asian.”
Hear Brad roar. He really thinks Felix is that much of a prize that he needed to threaten The Britch. It was hard to tell if he was upset that the child didn’t look like him or if he really cared enough for Felix’s friend Sabrina. It seemed more like he wanted to score hero points again. Britt on the other hand was looking out for someone else instead of herself for a change. She was concerned over the life and death matters that Robin was facing…or maybe it was Nikolas that made her concerned. Whatever was going on between Brad and Britt, I loved it. These two characters have grown so much, and that is not to say it is because they are wonderful individuals, but that they are an integral part to the show and bring much to the table. The hospital itself had seemed limited in characters and it is starting to feel as robust as it did back in the old days.

Epiphany.
She was back again. Even brief Epiphany moments are better than none. There apparently was a back story viewers were not entirely privy to of Patrick’s bachelor party. Elizabeth’s antics were the highlights and who knew…Epiphany was there recording the moment for posterity’s sake. Well, maybe not. She promised to delete it after entertaining friends at the wedding. Here’s to hoping that ABC has a video to share of the event before Epiphany deletes it from her phone.

Time to move out.
If you thought Lulu living with Milo was awkward for anybody, try Ellie living with Maxie. Their lives couldn’t be more diametrically opposed than they were when Ellie first moved in. Ellie may spend more time at the penthouse with Spinelli, but maybe it is a good idea for her to move on. Maybe she and Spinelli could find an apartment in Lulu and Dante’s building and make things more awkward but entertaining to the viewers.

Wyndemere reunion.
Robin, Anna, Robert and Duke together again. It is one of those things you just had to be there for but the reality is that it's easy to imagine if you didn't see it. It was everything most fans wanted and more. There has been nothing as poignant on this show in recent memory. It has taken such a long time to get to this point, and that is not to say that the length of the journey didn't add to the whole of the story. The cast of characters involved, the integration of the new with the old, the blending of the archenemies battling their Port Charles' rivals, it was all good in a very big way. November was truly a big month for "General Hospital."

The mystery of the two cell phones.
With all the strange things that were happening in relation to people getting ready for a wedding that might not occur and heroes and villains battling in the catacombs on Spoon Island, who knew that the strangest thing to occur this week would be us scratching our heads over the mystery of Patrick's two cell phones. Was one of the phones Robin's? Is that why Robin making one phone call seemed so confusing? Maybe she did call his cell but we are left to wonder whose phone Patrick had when he was in the lab showing off Robin's photo to Brad. Here's to hoping he didn't already sign up for a new plan with Sabrina for a family and friends discount because it will cost him if he opts out of that contract early.

Breaking the law.
What the heck? Maxie's putting her future hopes of being Connie's mother in jeopardy by visiting Spinelli at the penthouse. She ticked off quite a few people. It should be in her best interest to stay clear and follow the law. Anyone in Port Charles that is team Lante will have no problem turning her in to the PCPD. Take Soaps.com's General Hospital Poll to tell us how you feel about Maxie breaking the law.

The main event.
The show's end on Friday could not have been more suspenseful. So much has happened this year that I almost expected that Anna was Obrecht in her Anna mask ready to kill Faison before Robert appeared. Anna is angry enough to do so but she is the police commissioner. We at least got to the main event Friday - the wedding. Unfortunately there was no big reveal and viewers are still on the edge of their seats until Monday...a Monday after a long holiday weekend. As sour as that all is, we were treated to a Bobbie and Jerry reunion gone bad and Robin finally reached the mainland. We really couldn't ask for more to make us want to tune in next Monday.

Read Soaps.com’s After The Soap Finales: Where Are They Now to learn more about Michael Park in The Sound Of Music Live which airs soon.