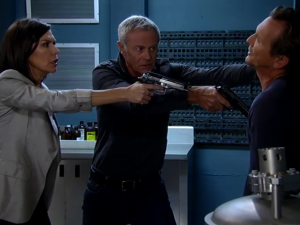 “General Hospital” Rundown for the week of November 18 – 22:

We’ve rushed through a week of one and a half trials, were harried over preparations for a wedding, and glimpsed a murderer covering their tracks.

On trial.
There was almost nothing more exciting this week than what went on in the courthouse. Between baby Connie’s custody battle and dead Connie’s murder trial, on the edge of seat drama took place that bested any previous trials in recent Port Charles history. Maybe it was the way the courtroom scenes were filmed, or the pace of the action, but it definitely seemed these trials might be more memorable than previous trials. These trials were not encumbered with brevity wherein previous trials the drama always seemed to be in and out of the courtroom in one episode. It may have taken a while to get to trial, but once there, the action appeared neither too slow nor too fast. It was evenly paced throughout a few days. Bravo! Now if the PCPD could become more like “CSI” perhaps AJ wouldn’t be on trial and Connie’s alleged murderer wouldn’t be burning evidence down at the docks. They did step it up a notch with Anna and Robert’s escape via his gum-thumb at least, but there was a lack of police presence character-wise. They must invest more time in lawyers than giving Anna a police force.

Diane.
I want Diane as a lawyer if I ever need one. She rocks. She’s always looking out for everyone, says the right things, says the funniest things, wears the best clothes for both work and play, and is brilliant in the courtroom. We should worry that they may make her a judge someday because she’d get less screen time…but she would be the reigning ‘Judge Judy’ of soaps.

Discovered.
Well, someone had to see Robin soon. I loved Felix’s attempt to suggest Robin’s sighting was a paranormal event and was there anything funnier than Robin claiming she was Epiphany? Okay, maybe Brad trying to blow off Carlos was almost as funny…he gets more endearing to watch each week. After the humor, the rest was all tissue time for the viewers. Robin having to listen to Patrick and Sabrina in the lab planning their future and worrying about Patrick loving another woman while at Wyndemere was emotional. The poor woman wants her life back but will wonder what it’s really worth once she does get it. She’d have to get over the fact that her husband and daughter fell in love with someone.

The catacombs.
Britt worrying about her mother was touching in a weird kind of way. Girlfriend really needed to step up the suspicion. Spoon Island isn’t a resort after all. There were people coming and going through a wall at Wyndemere while she she’d been busy getting further acquainted with the prince. Outside of the courtroom, it was possible the next level of exciting drama occurred in the catacombs. The fight between Obrecht and Faison, and the cerebral muscle wielded by Duke who was tied up entertained viewers.

Luke, Robert and Anna.
If Robert and Anna breaking out of the lab on Cassadine Island didn't entertain us enough we had Friday's show. It was literally a blast from the past to see them in action with Luke today and we can't get to Monday fast enough to see what else happens at Wyndemere. It makes me kind of sad, knowing that Tristan Rogers is heading over to "The Young And The Restless" soon. There's a good bet I'll be checking him out in Genoa City now that he's leaving Port Charles but one can't be thankful enough for all the memories he's giving us now.

Brad and Felix.
These two are really great for each other. As stated earlier, Brad is more endearing each week and I'd have to admit, so is Felix. Both characters are maturing and that's a good thing. Felix becoming the 'Amy Vining' of "General Hospital" wasn't so much fun. It could be all the excitement of planning a wedding, but he seemed less annoying of late…even when he chided Carly for sleeping with Franco.

We are family.
Heather was back and she wasn't alone in her desire to see Franco. Scott stopped by too. This is the dysfunctional soap family that will be sure to please and I'm happy they live in Port Charles. Maybe they can get a mansion somewhere near the Quartermaines.

One tiny little lie.
What a turn of events there was throughout the final moments of the Connie custody hearing. For a moment one could understand Dante's need to not perjure himself on the stand and go against the will of Lulu, but then she turned the tables when they got home. He lied about Sonny shooting him. How could he not come up with one tiny little lie to save Lulu? Let's vote on whether or not Dante was a good husband. Take Soaps.com's General Hospital Poll to let us know what you think of Dante's courtroom testimony.

Read Soaps.com’s The Vampire Diaries Recap: Dead Man On Campus to find out what shocking thing Damon found out in Maxfield's lab.