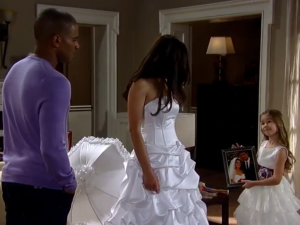 “General Hospital” Rundown for the week of November 11 – 15:

This week everyone went to bed dazed and confused only to wake up pretty much the same, the baby war got mean and ugly, and we were reminded Patrick’s engaged.

The opening closes.
There is a hell for striped paintings and it is the Jerome Gallery. If you’ve never wanted to see a striped painting in your life, here’s to hoping that you never will again after nearly a week where half of Port Charles congregated around Heather’s art. Perhaps the powers that be will ship them off to the Miscavige Institute for the Criminally Insane and keep Kelly’s walls immune from them…even though Heather’s description of each may have made some of us hungry for a B.L.T.

Heather’s baby daddy.
It was too shocking to absorb last Friday, but there it was. Heather is Franco’s mommy. If Franco didn’t have enough already to deal with over the loss of his creativity, now he had to absorb the repulsive truth that crazy Heather Webber is his mother. Personally, I didn’t think it was all bad and was accepting of the fact that Scott was being passed off as his father. So, Franco was dealt a double-whammy. There was a lot of speculation going around lately about who was old enough to be whose parent, child or lover. As a soap viewer, perceived age differences between characters are the first things to ignore, followed by how fast characters can transport themselves from Switzerland and Greece to Port Charles.

Patrick’s engaged.
This wasn’t so annoying until Sabrina started trying on dresses. Nothing against Sabrina, it was just that we know that Robin’s back. No matter how many feet Patrick has come to Robin in the last couple of weeks, it was never close enough to stop his impending wedding. How long will viewers have to endure the continued separation of Patrick and Robin?

Brad and Felix.
Well someone was wearing their heart on their sleeve. Brad was not giving up on Felix and it was cute. Felix was even initiating phone calls to Brad. Maybe they'll double-date soon with Franco and Carly.

Hot, hot, hot.
Although Brad and Felix, and Sam and Silas, were couples that didn't have the opportunity to get hot and steamy this week, a few others were. The couplings of Sonny and Olivia, Carly and Franco, and Nikolas and Britt, had it going on. Fans sound split over the Carly and Franco match up but she was vested in him since he was Jason's brother at one point with a brain tumor. There was no place else for this to go but between the sheets at the Metro Court. She had given the same chance that Jax at one time gave her. A chance at something real.

The baby war.
Almost as intense as the struggle between Michael and Morgan was the struggle between friends, Maxie and Lulu. These two were quick on the road to unfriending each other with the help of Alexis, Diane and so many well-meaning friends and family. It became clear that Dante wasn't prepared for this battle. Lulu could lose more than Maxie, she could lose Dante too. Who will they have if they don't have each other outside of their parents? This scenario could send a shockwave more damaging to them than losing custody.

Make love, not war.
It used to be hard to remember a time when Friday had such dramatic big reveals that left us hanging until Monday. Last Friday had two, and in the scheme of things, it's two more added to the many that have proliferated "General Hospital" this year. However, this week came and went with little recognition to that fact unless you count that everybody got lucky in bed, with the exception of Diane and Max who probably should have. The war simmered down so much for Sonny that it seemed to be boiling down to this all being about Morgan's revenge for living in Michael's shadow. It really was getting hard to tell if there was a mob war in Port Charles or just a war between brothers. The greatest hope is that the mob war storyline doesn't lose its momentum. It needs to keep up its intensity and make viewers continue to want it more. The complimentary stories between Cassadine and Wyndemere should help it greatly with Robert, Anna, and Duke's connection to Julian Jerome. Here's to hoping that some of the best is yet to come. Tell us what you think about the fluctuating intensity of the Corinthos-Jerome mob war.

Read Soaps.com’s The Vampire Diaries Recap: Death And The Maiden to see what Katherine's next distraction is.

Throwback Thursday GH Poll: Are You...