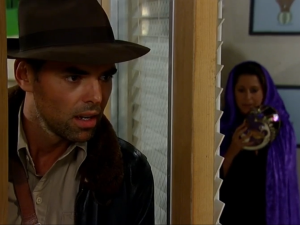 “General Hospital” Rundown for the week of November 4 – 8:

This week was full of surprises, announcements, and betrayals, leaving fans interested in who would fall on which side of the law or in and out of love.

Halloween….week two.
As Halloween continued into this week it became clear that we saw this story before. AJ came back to Port Charles on Halloween last year. If this is to become a tradition, maybe fans should start considering who they’d like to see return next year. It was still well played. The action at Wyndemere has left another fallen character at the hands of the evil duo, Obrecht and Faison. It’s never a dull moment on Spoon Island. Now we are left wondering about poor Duke. That’s one way to take a breather between the dilemmas of so many characters, so little time. That Patrick came so close to finding Robin was disarming and the confusion Nikolas left in his wake only made me want to yell at the TV, “Chase them!” November is turning out to be a nail-biting month.

Luke and Tracy.
Nothing says love like the whole enchilada. I love this couple. Sure, Luke isn’t in Port Charles much, but when he is, it would be nice to see more of these two together. It was like old home week. We’ve had a lot of return characters this year but as far as consistency goes, these two should go the distance and I hope that Scott, Lucy and Heather will tag along for the ride.

Election Day.
Yes, voting can be fun. There was nothing mundane about a day at the polling booth where Scott, Lucy and Heather are concerned. Throw in a D.A. and a scorned mob-son and you’ve got gold on your hands. These few scenes were filled with humor and strife depending on the moment. It was like the opening act for the big event…the art show.

Sebastian and Heather.
It was hard to tell if Sebastian was interested in Diane but it would be nice if he was interested in Heather. He certainly could talk a good art game, as did Heather, and both were enjoyable throughout the opening. Perhaps after the realization that she is the true artist, he will look upon her in a different light. Besides, Max was checking up on Diane’s relationship status. It’s about time those two hooked up again.

Carly, Franco and Derek.
This trio was still dancing around the obvious; Franco and Carly are smitten with one another. It's hard to read Derek, he's always asking after Alexis, so his interest in Carly seems like a move purely to disarm Sonny down the road.

Franco's opening.
As much wit and drama that was thrown around, it was expected that there would be a bit of sadness too. Surprisingly, one of the most poignant moments came when Heather called out Franco for his betrayal. Roger Howarth and Robin Mattson both made me want to cry. Franco could have looked wounded because he was exposed, and in front of Carly no less, but it felt as if there was more to it. Heather is more than his biggest fan. Franco was staring at the only person who has ever loved him, no matter what…and he hurt her. The betrayal and hurt was all there on the actors' faces. Almost as sad was the gaze shared between Franco and Carly before and after the stunning announcement Heather made.

Mob war.
It's hard to compare the Corinthos-Jerome mob war to past mob wars, but this war has continued along a smooth path towards destruction. Every minute this week was perfectly choreographed. It was impressive the way Morgan was playing a part to help the Jeromes.

Private Investigator, Sam Morgan.
Sam always seems to be on the cusp of a potential case but her only major story has been as Danny's mother. Unbeknownst to her, she's a minor character in a mob war, but it would be nice if her character blossomed out into something more again. Perhaps she can join forces again with Spinelli to do work for D.A. Baldwin when something wicked threatens Port Charles outside of the 'coffee import' business.

Silas.
Amidst all the mob intrigue was a hint that there is still something we don't know about Silas. Could this be a future story? Vote in our "General Hospital" poll to let us know how you feel about the mysterious Dr. Silas Clay and his ever-elusive past.