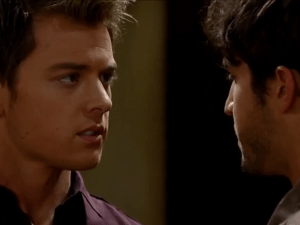 “General Hospital” Rundown for the week of October 28 – November 1:

Nearly everyone had someone to confront this week. It happened between couples, friends, and enemies. Let’s see how they fared.

Road trip!
Destination – Ryan’s Bar…and what a trip it was. Kudos to Ilene Kristen in reprising her role as Delia. I like the little storylines that have bridged a gap between the here and now and the past history of Port Charles. Delia gave Silas her phone number. Perhaps we will see her again when Kiki’s ready to embrace her family.

Halloween.
It’s not the only high note of the week, but Halloween was a hit. Holidays in Port Charles are like coming home. “General Hospital” always has a welcoming flow throughout the show giving a humanizing side to even the most evil of characters during these events. For instance, Obrecht and Faison were fun to watch parading around in costume and trying to get everyone in the mood. I hope these two characters stay for the long haul in some capacity.

Operation.
It was fitting that Brad and Felix’s costumes this week were both the patient from Operation, because getting these two together in a relationship was proving to be just that – an operation. Brad was still trying to make things right but Felix was still a hard catch thanks to his history with the ‘Britch’. It’s hard to tell if these two will ever make it. If anyone wants to wager a bet it could be on if Brad and Felix become a couple before baby Connie gets a family.

He loves me, he loves me not…he loves me!
Spinelli loves Ellie. They worked it out and embraced their love for each other. It could be too soon for them to work it out. Ellie’s lies were serious and Spinelli will be reminded of this during the custody battle. There might also be unresolved issues between him and Maxie. It’s sad for anyone who was hoping for a Maxie and Spinelli reunion to happen but as they bond over their child and are thrown together in a fight to gain custody, it could happen.

Franco and Carly.
Franco always seems to say the right thing, but yet Carly hardly ever responds. Behold her affliction of the sudden self-control she has these days. Kiss the man already… well, okay, maybe not with him dressed up as Andy Warhol. That was a little freaky. Yes, it’s hard…Derek, sexy, check…Franco, sexy, check…but when will that woman decide? In the end, Derek doesn’t stand a chance when Carly finds out who he is and what he’s done with Morgan.

Sonny and Derek.
Sonny confronting Derek about Julian Jerome was amusing to say the least. His banter and baiting of Derek was great. It was nice that Sonny didn’t show his hand yet (just a lot of dimple action), but it might be said that Derek had the upper hand given his new relationship with Morgan.

Carly and Ava.
As much fun as watching Sonny square off with Derek was watching Ava scoring points against Carly. Knowing that Morgan is in deep with the Jeromes only makes what is to come more dramatic…maybe more so than the baby Connie reveal.

Michael and Morgan.
The tension growing between Michael and Morgan is reminiscent of the relationship Sonny had with his own brother, Ric Lansing. Is history repeating itself? Chad Duell and Bryan Craig are sucking me in. I can't get enough of these two on screen together.

Robin and Emma.
One of the saddest and emotionally draining moments was the exchange between Robin and Emma at the Halloween party. It was heart-wrenching when Emma introduced Sabrina to a masked-Robin as her soon-to-be new mommy. This is a taste of things to come in this storyline. Grab the tissues in the weeks ahead.

Maxie and Lulu.
The baby war has officially gotten underway. Although it took some time, probably one of the most important confrontations happened this week when Maxie confronted Lulu. They're ready to bring it on and I'm ready to watch. The scene between Kirsten Storms and Marcy Faith Rylan was phenomenal, the dialogue incredible. It was the best thing that happened in this storyline in a long time. The scene of Dante opening up to Olivia about his feelings and concerns for his wife played well too. Is there trouble ahead for Lante? Vote in our "General Hospital" poll to let us know what you think.

Read Soaps.com’s The Vampire Diaries Recap: Monster's Ball to find out who Nadia really is.