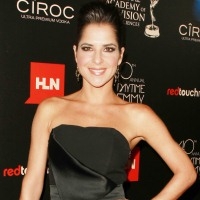 This week, “General Hospital” star Kelly Monaco (Sam) will join a discussion panel on “Bethenny” Friday November 1, titled Breakup Aftermath: What Team Are You On? The panel, which will discuss failed relationships, also includes Tionna Smalls (editor of Bossy), and comedian Sherrod Small. Other guests on Friday’s episode are Chef Sam Talbot (“Top Chef”) and Rosie Perez (“The Counselor”).

Monaco had a great time taping the show and recommended fans even check out this Wednesday’s Halloween show. The show website has Kelly Monaco scheduled for Friday but we’re awaiting confirmation to see if Monaco’s recommendation to tune in Wednesday is an indication that we might see her twice this week.

Had a blast taping @Bethenny. Tune in Wednesday for her Halloween special. I actually wore a costume. (Sorry @STEVENDANN next time!)

“Bethenny” airs weekdays on FOX. For times in a location near you visit Bethenny.