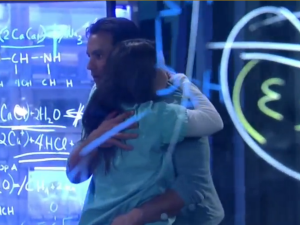 Get revenge on Faison. (ABC)

“General Hospital” Rundown for the week of October 21 – October 25:

Anna and Robert.
It’s about time this crime fighting duo joined forces again. Their adventure seemed more exciting than Luke and Laura’s last escapades. Maybe it’s seeing another villain besides Helena after all these years that spiced up the recent happenings on Cassadine Island. Anders Hove (Cesar Faison) and Kathleen Gati (Dr. Liesl Obrecht) are captivating to watch. Their representation of the maniacal couple leaves nothing to be desired. Sebastian Roche never disappoints as well.

Robin and Sabrina.
Oh the elation of Robin being found. It took all of the next few episodes to have the soaps gods rain on our parade. Jerry Jacks decided Robin could go home to Port Charles but she couldn’t let anyone know she was alive. Then, it got worse. Patrick proposed to Sabrina, a few times for good measure, and she accepted. These major annoyances were quite exciting. Can Robin successfully hide out in Port Charles and find a cure before Sabrina and Patrick rush down the aisle? Will the viewers’ hearts be able to sustain such bittersweet heartbreak? Don’t fight it – this is good stuff. It even appeared to break Britt’s heart when she saw the engagement ring.

Baby wars.
It’s quite possible that the mob wars will reach completion long before the end of the baby wars in Port Charles. No matter how efficient Diane and Alexis are as attorneys, the storyline has a different agenda. Don’t blink now or baby Connie might be SORAS’d and asking questions about her parentage before next month. This is tiring and the outcome will be that Diane and Spinelli will be the only ones in this storyline to come up smelling like a rose.

Nikolas to the rescue…or not.
For someone who grew up in the most challenging of circumstances, Nikolas seemed clueless about how to protect his friends from his unwelcome house guests. Hopefully he will never leave anyone unattended in the living room of the manor on Cassadine Island again. He found Robin and lost Britt. He found Britt and lost Robin. No one could find Robert and Anna. The security is lacking. All of the Cassadine fortune must be tied up in cryogenics.

You still haven't found your shirt.
Well Diane certainly summed it up. Where was his shirt? One of the funniest running bits was Morgan's lack of sleeves and anything in between. Morgan was not the only one who hadn't found his shirt. Franco ran a close second.

Mob wars.
"General Hospital's" mob wars are giving a nod to the classic shows of the 80s and 90s. This week made a strong showing in just how rich the mob storyline is for Port Charles. Things heated up fast and furious between family members and enemies. This could possibly be the best mob storyline on the show given the complexity of the relationships for all the characters involved. Just thinking of Morgan going up against Sonny or Sam learning her father is alive is sensational. Friday's episode really pulled everything together. The animosity between the Corinthos brothers, the ongoing power struggle between Derek and Ava, and Robert and Anna's discussion of Derek Wells miles away from Port Charles makes me want more and more.

Jason.
It's easy to forget that Robin's been gone so long that she didn't know Jason was dead. The moment leading up to this discovery was sad. It was also final since Faison admitted to her that he killed Jason.

Ménage-a-three.
Other minor storylines giving a feel for Port Charles' heyday is anything involving Scott, Lucy and Heather. Keeping these three around has truly added dimension to the show. Luke and Laura have always waxed and waned as part of the show over the years so it might not feel like they ever left. There is something comfortable about the addition of the other legacy characters. I sincerely hope it is not a fleeting thing because they have brought back great memories, important tidbits of information, and continuous humor this week that kept continuity between storylines and show history.

Not dead yet.
Jerry was fighting for his life. His desperation captivated me enough. A desperate man can do desperate things and those things will keep me watching to find out what happens next, especially when it's Jerry Jacks. Robin seemed sincere in wanting to save him but has Jerry Jacks run out of lives? What should happen to Jerry Jacks?

Read Soaps.com’s The Vampire Diaries Recap: For Whom The Bell Tolls to find out what Matt learned about his blackouts.