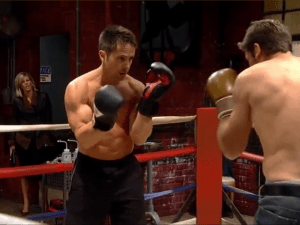 “General Hospital” Rundown for the week of October 14 – October 18:

The intrigue picks up momentum this week when we see continued developments abroad and in Port Charles. There are adventuresome chapters on the horizon for “General Hospital.”

Empty nest syndrome.
Ava hasn’t cornered the market on silliness while suffering from empty nest syndrome. Her rival Carly appears to be in the same boat. They both need something to fill the void in their lives. Carly really should consider raising her daughter instead of worrying about her boys. Just look at what she’s gone and done…she’s falling for Franco. As different as these two women would like to think they are, they are quite the same when it comes to men. They like them bad. This kind of makes one wonder about Silas. It’s obvious her judgment is cloudy and she has no control over the situation with Morgan. Derek was right to be concerned. There aren’t enough ground rules that will keep that boy out of trouble.

One plus one plus two plus…equals whatever.
Shawn and Sonny were getting to be like a broken record. How many times did they need to go over what they knew? What they knew about Ava and Derek may only fill the head of a thimble but it was enough to know that something wasn’t right in Port Charles and Derek and Ava were the cause of it. Apparently Sonny needs to talk to everyone in town before he can connect the dots and then Shawn still won’t agree with him.

Get a job.
Some people in Port Charles do work. They are usually doctors and nurses and the staff at Kelly’s and the Metro Court. Well, Michael and Kiki woke up one day and planned to add themselves to the work force. It looks like Kiki will be successful anyway; Michael’s career on the other hand was on hold until Sonny could run it by his mother. If it’s not the Quartermaines it’s his parents running his life. He needs to step it up. This character needs to grow in a new direction outside of one that is Sonny, AJ and Carly’s son.

From Switzerland to Cassadine Island and back…and back again.
Anna Devane, meet Anna Devane. The look on that guard's face was priceless and one would have expected that in that moment, it's time to have your game face on. He didn't - so much for maximum security. From what we could see of Tracy's infiltration of Cassadine Island, it's a good bet she could have done better in that situation and maybe helped a girlfriend out. The trek back and forth with everyone coming together on Cassadine Island this time seems more exciting than Luke and Laura's search for Lulu. Maybe I want Robin back that much more than Lulu?

In the end, fans probably couldn't have asked for a more exciting week on the island. Friday especially was must-see TV. Obrecht was left lying on the floor, Britt found her baby, and the best tear-jerker of them all...Nikolas came face-to-face with Robin. The happy tears are probably clouded with tears of sorrow though after we witnessed Patrick propose to Sabrina. I wouldn't miss Monday.

Our heroes.
Diane, who always proves to be the brightest, wittiest, and best dressed person in Port Charles, did not let us down this week. It is great to have her back full force. She's the only one who told Morgan what he needed to hear. Hopefully he heard her but if he was lounging around without his shirt on it's possible the sound of Diane's voice was just absorbed into his six-pack.

Tracy was bad-ass too and definitely proved herself as Bonnie to Luke's Clyde. Did you see that? She shot Jerry Jacks!

Nikolas was Britt and Robin's hero. The prince was taking back his island.

The anti-heroes.
Sabrina and Felix were busy feeding into their negativity. I personally can't wait to see what happens when Robin returns. I wonder if Felix will have a nickname for Robin. The better question is though, what will Sabrina do?