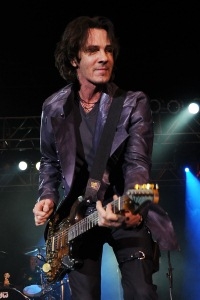 The ball is presented by The GUESS? Foundation and will be held at Boulevard 3 in Hollywood. Tickets are available at Autism Speaks.

Springfield was a cast member on Grohl’s “Sound City” movie that was released earlier this year about the history of Sound City Studios in LA. He helped write the song “The Man That Never Was” on the soundtrack with Grohl and others. This spring, Springfield also revisited his soap star roots and performed with others in Port Charles in the return of the GH Nurses’ Ball for the show’s 50th anniversary celebration. Fans who can’t make the Blue Jean Ball can catch Springfield at his next fan event from November 14 – 18. Information and tickets are available at Rick Springfield & Friends.