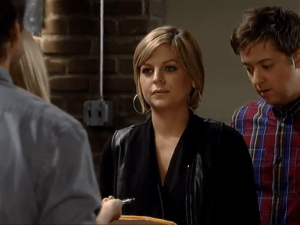 There’s a global birthday celebration, international intrigue and horror, and back in Port Charles Franco’s art is still crappy.

Falconeri fail.
What planet does Dante and Lulu live on? Olivia needed to give the old Falconeri slap-upside-the head to Lulu instead of Duke. Lante had flipped a switch from most adorable to most daft. Maxie seriously needed to slip back into bad-girl Maxie mode and take Lulu down a couple pegs. There should be no more summoning of the people of Port Charles to their apartment. The next meeting between these two couples better be in a courtroom with Alexis and Diane facing off and no Lulu mantra about Maxie doing her wrong. Yes, Maxie did do her wrong but Lulu was aware of how Maxie felt about her baby and how much Spinelli wanted a child. The attachment issue was real and as sad and disappointed as Lulu and Dante were it seemed just as cruel for Lulu to play tit for tat with Maxie and Spinelli’s feelings.

Moving on up.
Morgan got a new crib, but he also might have gotten a new mommy out the deal. As much as he needs to listen to a mommy, Ava isn’t it. After moving into Ava’s new apartment it was apparent to her that anyone that visited was a bit confused or amused by her situation. Morgan listening in on Jerome conversations didn’t fly with her and she had to lay down ground rules. Morgan doesn’t appear to be one following anyone’s rules but his own right now. If he wants to be a man, he needs to own up and take care of himself instead of going with the flow and leeching off of whoever will put up with him. It was surprising that Sonny didn’t just abduct him and store him for safe keeping in the coffee warehouse until he could make better decisions that were aligned to Sonny’s. It’s so not Sonny to let someone make their own decisions. Maybe Carly will have better luck with that once she finds where Ava lives.

Happy Birthday, Robin.
Robin had a birthday that everyone, including her captors, was ready to celebrate. The cupcake and candle moment between Emma and Patrick at Kelly’s and Robin on Cassadine Island was touching. Even more touching was her funeral tribute that Patrick shared with Robert. It’s funny how I don’t remember her funeral being that way. Maxie messed it up with all the “I killed Robin” drama. While everyone the whole world over who knew Robin thought about her, she got right back to work with such determination. That girl wanted to go home. Did Patrick feel that?

Happy Halloween.
Faison's kiss to Obrecht-in-Anna-mask was the strangest thing I've ever seen on TV. If Faison didn't have your room set to cold and creepy when he came into the interview room, it was by the time he locked lips with who the viewers may have thought was a reciprocating Anna. Soaps.com Editor-In-Chief Christine Fix joked, and I certainly agreed, there was something very Halloween about it all. Helena and every dead Cassadine that preceded her could have clawed their way out of the damp cold ground of Cassadine Island in zombie fashion and it wouldn't have been as creepy as that kiss. Okay, maybe it was creepy for Anna to see a double of herself in Switzerland or for Britt to acknowledge to Nikolas that Faison was her father. A chilling Faison week all around.

Cassadine Island.
Speaking of Halloween, the second creepiest place on earth, next to any room that Faison enters, is Cassadine Island. It was kind of sexy though when Tracy came to Luke's rescue. So glad he was too ill to stop her antics. She's a woman with a plan, stuck with a man with an attitude. They rock. It's uncertain how sincere Luke was making all these deathbed promises. She didn't want to hear it. It's a good bet he'd back out if he doesn't die.

Heather.
Heather came back and a thought occurred that maybe Franco should just rent another room on Carly's dime as a 'studio' and Heather could live there to paint his striped series. Although Heather might not be as gracious with Franco when she learns he's using her, in which case, more humorous drama will ensue.

Get a room.
Too many couples this week were using another to strike jealously into the heart of their intended love. It's possible Diane just about died when Franco started touching and ogling her before planting one on the kisser. She caught on quick and Carly was up to the task of utilizing Derek in similar fashion. What can we say…it's a hotel folks, get a room. Meanwhile, Olivia seemed to be pining away over the hot-accented Robert and Elizabeth was well aware that new bloke in town, Carlos, was a hottie. Are these hints of things to come? Let us know how you feel.