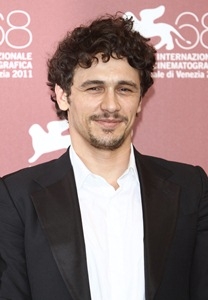 A rebel with a cause.

James Franco’s (ex-Franco) much anticipated US release of the film “Sal” will be available October 22 on VOD and iTunes with openings in select theaters on November 1.

Franco wrote, directed and stars in this non-traditional biopic that chronicles Sal Mineo Jr.’s final hours. Mineo was an actor remembered mostly for his teen performances in “Rebel Without A Cause,” “Exodus,” and more. He died tragically in a 1976 stabbing during a robbery around the time his acting career was making a comeback. Franco plays director Milton Katselas in the film. The movie “Sal” is based on the book Sal Mineo: A Biography by Michael Gregg Michaud and stars Val Lauren in the lead (“Hawaii Five-0” and “Monk”).

Fans will be happy to know that Amber Tamblyn is a series regular on Two And A Half Men. Read Soaps.com’s Glee Recap: Tina In The Sky With Diamonds to find out who Sam is crushing on.