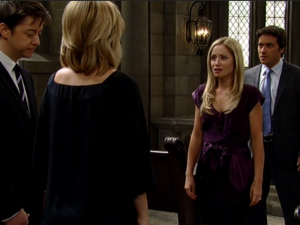 I'm a doctor, not a babysitter. (ABC)

Steamy sex, awkward couple moments, and baby drama, come into play this week; none of which leave the people of Port Charles feeling anything but crappy…like Franco’s art.

Baby drama.
Who knew two babies could bring so much chaos? At first it was dismaying to see such a disturbingly dark church for Connie’s christening (it may have been the same church for her namesake’s funeral), but perhaps it was “GH’s” attempt at performance art as it mirrored the darkness of the underbelly of Cassadine Island where baby Ben was stolen away to. It’s all very similar to the darkness the viewers are suffering to get through this storyline as we wait for the revelation of Ben’s true parentage. We’ve only been half satisfied with Brad’s big reveal and kudos to him for trying to do the right thing. Hopefully he can be rewarded with a man better than the likes of the gossiping, righteous Felix. Lulu brought her own righteousness to the table and totally forgot everything that transpired since Maxie’s miscarriage of the Lante baby. Yes, Maxie did the wrong thing…but she’s a friend. Apparently Lulu’s compassion never unfroze after leaving Cassadine Island. Did she miss the part where she came back not accepting her life in Port Charles? In hindsight this is reminiscent of old-Lulu going after Dillon. Lulu’s not all she’s cracked up to be sometimes. Equally lacking compassion is Mac who seemed to think Maxie would be sporting her new babe in arms after confessing Connie was hers. His compassion couldn’t fill the head of a pin as far as Lulu was concerned. Setting all the indecisive Lulu/Dante and Maxie/Spinelli points of views, Nik and Britt brought something real to the table…concern over a baby. Whether Ben is Britt’s baby or not, she played a convincing concerned mom and Nik was sucked right in. I’m feeling more for these two characters right now than any of the others.

Meeting of the mega minds.
Jerry Jacks brings it every time he’s on. Prior to this week we haven’t seen a lot of interaction between him and Obrecht so it was welcoming to see him arrive on the scene wielding his verbal sword. It was entertaining to watch his annoyance over Obrecht escaping to Cassadine Island with her kidnapped grandson. As evil as she is, she seems to have a bit of Heather Webber’s craziness about her, so crazy that only she can understand her true motives. I applauded Robin’s skepticism and hope she leaves Cassadine Island looking for the truth about Britt and Sabrina instead of believing Obrecht’s account of things.

Robin.
Yes! Robin’s story may finally be coming to its fruition. Jerry has her right where he wants her and Luke only knows that someone behind that closed door holds the cure. According to Jerry, there’s only one, so what will Luke do? His fate will be determined by one of two people, Jerry or Robin. Robin isn’t aware of Luke’s dilemma but if and when she is, what can we expect to happen?

Carlos.
The addition of Carlos into Sabrina’s life is just what the doctor ordered. It’s obvious the doctor wasn’t Patrick Drake who all of a sudden feels something he’s probably never felt in his life…being the other man. The irony in all of this is that Robin would have been amused by this turn of events if she were a ghost monitoring his life. Can anyone say stalker boyfriend? It was creepy to receive flowers in public. Despite that, he claimed she’s the love of his life. She’s not Patrick’s, so we can expect an interesting turn of events when Patrick finally learns that Robin’s alive.

Heather.
Pun intended…it's artful of the writers to sneak Heather into a Franco storyline. Some fans contend there are too many characters and storylines are stretched. I welcome the multiple storylines and have a growing appreciation for the writers bringing back Roger Howarth, Michael Easton, and Kristen Alderson while keeping the fan favorites of the past. I'll keep coming back for more, especially to see Heather Webber.

Awkward couple moments.
Let's start with Sabrina and Felix since they can be considered a couple of sorts, in the unhealthiest of terms. These two are a drag together and it's tiring to listen to the constant name calling. It's so bad now that when Emma saw Britt in public she sported her Felixtude and called her the Britch. It's very reminiscent of Amy Vining and Richard Simmons, but some of the name calling has seen its day.

In the love, lust and pining away category, there was something for everyone. Kiki and Michael shared their intimate feelings and took their relationship to the next level while Ava and Morgan just turned up the heat to oh so wrong but we're doing it anyways. Meanwhile it seemed Carly took on an unnecessary interest in Morgan to avoid the unavoidable, her growing feelings for Franco…and it's no secret his feelings grew for her. A stone's throw away from crazy, we had Alexis and Derek in the unhealthiest of relationships, a friendship based on lies. It will be interesting to see what will happen when she realizes that Derek was the mobster who fathered Sam.

Our heroes.
Luckily, Anna and Duke became the heroes this week. As graceful as their tango, they are pulling together the bits and pieces of the continual problems that haunt Port Charles, pending mob wars and international intrigue. We can't discount how Robert longed to remember what really happened before the lights went out for him a year ago. Robin counted on him not letting her down and he didn't.

Read Soaps.com's The Vampire Diaries Recap: I Know What You Did Last Summer to find out how much Katherine despised being mortal.