Sam, Silas, Alexis and Derek.
Sam and Silas are turning out to be quite the pair. It was strange though for Silas to tell Sam that he wasn't trying to go on a date with her on the pier then to turn around after Danny's test results came back and say, "I changed my mind, I do want to take you to get some grub after all."

Sam needs the breather though. Who doesn't need a temporary reprieve from thoughts about their son's illness and their dearly departed partner getting pushed into the river after being shot? Alexis told Sam to go for it with Dr. Clay and Sam in turn told her mom that if she wanted to have some fun with Derek Wells, then well...she should. Unfortunately, Sam thought she was betraying Jason by going out with Silas and decided to eat cheesy puffs with Patrick at GH instead and contemplate. Patrick's advice about having fun was definitely something Sam needed to hear again as she quickly headed over to the party only to witness Ava kissing Silas.

A daddy's blues.
Watching Spinelli gaze at the dad with the baby at the Metro Court while he was talking to Carly was heartbreaking. If only he and Maxie could just tell Dante and Lulu the truth and raise their baby, then all would be peachy keen. Only that's not how this works. Maxie telling Ellie to take the secret to the grave was a bit much given Ellie couldn't handle lying anymore and Maxie looked perpetually sad every time the baby was discussed.

The plotting pair.
Rafe was very gullible to go along with Taylor's plan to break up Molly and T.J. Are we being led down the road where Rafe and Taylor end up liking each other when Operation Main Squeeze is over?

A visitor from Sabrina's past and a mention of Robin.
Carlos and Sabrina obviously seemed to have different opinions on where they were in their lives as he told her that he wanted her back after they exchanged a tongue dance when she opened Patrick's front door. And Carlos is a henchman for the Jeromes? That was unexpected.

So now that Carlos is in PC, what will happen with Patrick and Sabrina? Patrick will most likely ditch Sabrina when he learns Robin is alive, and the hint with Emma wanting her mommy proves there's soon to be a whole lot of trouble in paradise.

Read about Jason Connery's Role On GH and then catch up with the latest celebrity scoop on Britney Spears' Vegas Show. 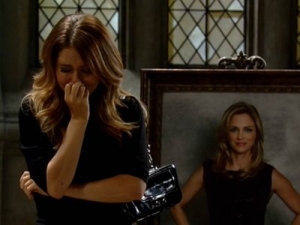 This week Connie was laid to rest, Duke got hired by Derek Wells, certain characters learned Julian Jerome may be alive and someone from Sabrina’s past came to town to give Patrick a run for his money. It was one of intense drama and the start of Robin’s return.

Connie, who?
So the citizens of Port Charles spent like what 5 seconds on Connie’s funeral? No reflections on when she was only Kate Howard. Zip. Zilch. But then again the Port Charles residents are not known for having long drawn out funerals. It just would have been nice for there to be more than half an episode considering the woman was murdered and was not a nobody on the show.

Britt’s baby.
Nik was doing a great thing looking after Britt and her baby, for Ben’s wellbeing. You’d think she had learned her lesson about lying to those close to her. He thought she turned over a new leaf. Too bad it took Felix spilling the beans to him before Nik called Britt on the carpet about not having a place to call home and that she could now say “there’s no place like home” about Wyndemere.

The mysterious Ava Jerome.
The exchange between Ava and Sonny was very interesting to watch. Sonny’s judgment is clearly clouded letting Ava talk him out of taking his lithium. She knows he has bi-polar disorder but what’s medication when you can go to your son and daughter-in-law’s wedding party instead?

And Ava and Julian didn’t have another place they could meet other than the pier? What an odd choice for a meeting of the mob minds. Watching Ava play kickball with Vince after Julian shot him was hilarious. That was definitely a replay moment on the TiVo.

It seems fitting that Duke would grovel for a new job from his old boss without knowing it. That must have been some plastic surgeon Julian went to that left Anna and Duke so clueless they can’t even tell that behind the magazine mogul’s face lies their old nemesis. William deVry is excellent in the role. While DeVry’s character isn’t showing signs of being the infamous Michael Cambias from “All My Children,” or the over-protective Storm Logan of “The Bold and the Beautiful,” double J is proving to be just as ruthless and cunning and the man has only been in PC since late July.

Guess who’s coming to MoKiki’s party?
Okay, when are Mikey and Kiki going to give in to their feelings? Watching them salivate over each other like animals in heat is becoming nauseating. Not because they don’t need to be together, but because they keep tap dancing around their feelings and sweeping them under the carpet, rug, take your pick. The let’s just be family thing is getting a tad old. Morgan isn’t any better though, stealing Ava’s credit card to rack up more gambling debt. Come on now. Taking money from the woman who helped him keep secrets and protected him from getting his head bashed in, how can someone do that? On top of that he subtly threatened Ava after she considered tell her baby girl everything Morgan had been up to. If only Morgan knew…Ava is never going to let him live that one down. She’s not the milk and cookies nice art dealer he thought she was.

Mikey brought Penny to the party to keep his mind off of Kiki and it didn’t take Penny long to wake up and smell the coffee. And Morgan keeping Kiki preoccupied and cutting off her conversations with Mikey at every turn reeked of desperation. Psst, will someone please tell Morgan that it’s only a matter of time before Mikey and Kiki can no longer fight their urges.

Sonny without lithium at the start of the party was great to watch and what was even greater was Carly and Olivia’s utter disbelief and bewilderment that he was off of them. Sonny’s rant about A.J. killing Connie and letting the cat out of the bag about Morgan’s deception was a cliffhanger for sure. The writers outdid themselves with the lines they gave Maurice Benard.

Throwback Thursday GH Poll: Friends On The Outside