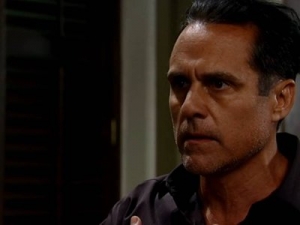 This week was one where grief and touching moments intertwined. From Sonny’s grief over Connie to Maxie coming to terms with giving up her child. It was a week of superb acting and intrigue.

Poor Sonny.
Watching Sonny grieve is a roller coaster ride. We started the week off with Mr. Corinthos wanting to play Russian Roulette and end it all because of the pain he causes others being bi-polar and having a mobster lifestyle. It was fun to watch him crush his pills then wipe his hands and hiding them in his pockets. Why didn’t Olivia consult with her extra sensory perception about checking those sofa cushions for those pharmaceuticals like she does with everything else? Not to mention she should have clued in on Sonny before he punched that reporter senseless for hounding him about Connie.

Ava is proving to be even more sinister than originally thought; entering Sonny’s home under the auspices of being family, offering him condolences and further implicating A.J. The grief is definitely getting to Sonny because Ava never would have gotten in if he were on his meds, the love of his life hadn’t been shot and he didn’t have ignoramuses working for him. Well, not all of them are ignoramuses. Shawn and Max were able to get a hold of Vince, a Jerome henchman, so maybe they aren’t as dimwitted as they appear.

Baby games and baby names.
So Maxie and Spinelli are going to adjust to Dante and Lulu raising their baby? Hmm, seems a bit odd considering Maxie can barely keep it together every time the baby cries. Looks like Lulu’s threats worked as her bff is going to sit on the Collins’ couch and give Dr. Kev the rundown on what she’s been up to. There was a moment when Anna was comforting Maxie where it seemed as though Maxie was having a change of heart about taking her secret to the grave. Unfortunately, the moment came and went. Britt’s had a change of heart though, at least it appeared that way. After blaming Sabrina for her baby having breathing issues, she thanked her for delivering it. Sabrina is a very tolerant person, although, it did look like she wanted to smack Britt on a couple of occasions pre, during and post labor.

Since when does a hospital hold your baby hostage until you pick a name? After a few shouts at the TV about that, it was nice to see the Falconeris give a nod to a woman who was just offed a week prior. We still have yet to hear Britt's son's name. She might need to let the proud papa, Nik, ahem, Brad handle that. Watching Nik hold the precious little Westbourne had me pondering that maybe it's time for Britt to spill the beans about who her son's father is. The writers have opened that can of worms with Felix's comment to Sabrina about the baby looking nothing like Brad. No really?

Bro and sis.
We know there is more to the story with Ava and Julian than them just being family, but seeing them plot and connive is what makes Daytime, Daytime. Of course, Ava had to pick up her bottom jaw after being thrown out of the Q mansion, not once, but twice. Yikes! She seems to have bounced back with a primo suite at the Metro Court. I'd be willing to wager that Franco will have his room next to hers since Monica told Jason's twin to 'hit the road Jack' and Carly's heart looks to be melting to Franco as she agreed to let him stay at the hotel. Speaking of hearts that melt, Alexis is like a school girl every time Julian comes around looking as if Tinker Bell has blown some fairy dust on her with the twinkly gloss her eyes have. This saga is going to become even more engaging to watch once Sonny's goon, Shawn, gets wind of it. That fairy dust must be really getting to Alexis because she gave Julian a dossier on her mob relations. Julian is keeping the lid shut on his past though, so Tinker Bell hasn't worked magic on him yet.

Duke is still a little uneasy about Ava and for good reason. He repeated his suspicions to Anna again. Hopefully, this time the commish and the PCPD get moving. One can only hope. How long will it take them to figure out the connection between Ava and Julian?

Bad publicity.
A.J. is not only in a mess, he is one. He seriously expected Michael to bow in agreement to Diane's scheme to pin Constanza Louise's murder on Sonny. What alternate universe is he living in? It is a brilliant move though, even if it won't hold water in court because no one on team A.J. will go for it. Not even Monica, who came back from her medical trip and gave her son a hard time for being behind bars. She really hoped A.J. had changed. She should know that most leopards don't change their spots and unfortunately had to learn that the hard way when she got the boot from the head gig at hospital.

The Phoenix and the dragon.
So everyone gathered at the pier to celebrate Jason's birthday. A celebration at the place where he was gunned down and pushed into the water. What about Sam's place? Or Kelly's?

Watching Carly and Franco celebrate was interesting, especially considering they discussed Ava for the majority of the time. And Franco looked so pitiful asking her to partake in the birthday festivities because everyone forgot it was his too. What's with this creepy figure moving around corners like The Shadow on the pier spying on Sam and Silas and on Carly and Franco at the Metro Court? Stalkerish much?