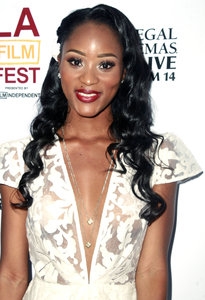 Soap Opera Digest is reporting that Pepi Sonuga has taken over the role of Taylor DuBois, Felix’s sister, from Samantha Logan. The actress will make her debut on “General Hospital” later this month. Logan is currently shooting with co-stars Steve Carrell and Jennifer Garner in Disney’s adaptation of “Alexander and the Terrible, Horrible, No Good, Very Bad Day.”

The Nigerian born actress moved to Los Angeles, California at the age of 10 to pursue a career in entertainment. She began modeling for brands such as Forever 21, Sketchers and many more at the age of 15. She appeared in the film “Life of a King” as the character, Michelle, in June.

Check out Soaps.com's recent interview where former GH writer Karen Harris discusses Part Of The Plan, a new American musical and then read the recap for Venice The Series Season Four Episode Five to learn what happened after Gina found out about Ani and Lara's engagement.