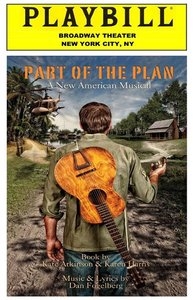 ”We all have a path to take no matter how much you fight it.”

The former co-head writer of ”Port Charles” and “General Hospital,” as well as script writer, Karen Harris, knows the ins and outs of the world of Daytime drama. Leaving ”General Hospital” three years ago, Harris embarked on a journey to find a new writer’s voice with an original musical entitled, ”Part of the Plan: A New American Musical,” with music and lyrics by the late, celebrated Dan Fogelberg. She took the time to speak with Soaps.com about the original story and her other projects.

Soaps.com: Tell us about ”Part of the Plan.”

Harris: About three years ago, I left ”General Hospital.” Soaps were shrinking . I had been on and off the ABC soaps for 15 years, head writing for ”Port Charles.” I love the show, but felt it was time to find a new voice.

Harris: I began to write the book for a musical. A new friend, Kate Atkinson heard me say I wanted to write a play and she asked if we could collaborate on a musical she wanted to do. I knew Dan Fogelberg’s music and said yes. His music was very popular and some people say Dan Fogelberg wrote the soundtrack of their lives. Kate’s a terrific writer and the collaboration is working beautifully.

Soaps.com: What is ”Part of the Plan” about?

Harris: “Part of the Plan” is a story about a 16 year old girl of privilege, Rebecca, who falls in love with a boy, Jake, who her family thinks is beneath her. She gets pregnant and is forced to give the boy, Sean, up for adoption. The story is about Sean trying to understand why people leave him. We follow Sean through three decades, beginning with the 1950s, which was the Post World War II generation; the 1960s the sexual revolution and into the 70s, which was heavily political. These were three super dramatic decades. Sean even volunteers in Vietnam and he has no idea that one of the friends he makes is his own brother. It’s the kind of story that soap opera fans will be taken with. It’s poignant. It’s emotional, dramatic. There’s a lot of elements in it that I learned to do in all of my writing, especially ”General Hospital.” We try to avoid coincidences as much as possible but what some people call coincidence, I call fate. It’s all about fate. Things don’t unfold before their time. God, the universe, a higher power is in control. We all have a path to take no matter how much you fight it.

Harris: We are rewriting it, so it’s a little more streamlined. The story touches people who read it. War, long lost love, these are high emotional points in people’s lives. Investors love it and are anxious to see a staged reading or workshop. We started a Part Of The Plan Kickstarter campaign. We have at least one staged reading planned at the end of October and a workshop after the first of the year. The Kickstarter campaign runs about 7 more days. Fogelberg fans have been very supportive. If your readers go to Dan Fogelberg Musical, they can hear some of the music we are planning on using. Fans of ”General Hospital” will appreciate it. In fact, I’d love it if Sonny and Brenda fans or Scrubs fans (Patrick and Robin), those were supercouples I had the privilege of helping to create, each gave $5 to Kickstarter. It would mean the world to me.

Soaps.com: What other projects are you working on? I know this is the big one.

Harris: [laughs] You mean some of my side projects. [laughs] I am working with a company called The Company. I am working with Charlie Ebersol, he’s the son of Susan St. James and Dick Ebersol. We are developing a show called ''Honor Falls,'' which is the name of the town in the show. It is about a soldier that comes home from Afghanistan and is the only survivor of his platoon. The soldier needs to find redemption and makes the worse possible choice in love. It’s very 'Nicholas Sparks' in tone. It will be a Primetime soap once all the funding falls into place.

Harris: I also started teaching a class last week at Loyola Marymount University. One class a week to grad students. It’s called ''Writing the Episodic Drama.'' We are recreating a writers room so they can see what it’s like to work on a staff. I also mentor military veterans each year, helping them find their creative voice. While these are my side projects, my main focus is on ''Part of the Plan.'' I am really passionate about this story. We are also on Facebook as Dan Fogelberg Musical - Part of the Plan and you can follow us on Twitter @Part_ofthe_Plan.

Read our Venice The Series Season Four Episode Five Recap to find out what happened when Gina learned about Ani and Lara's engagement and then catch up with Soaps.com's Soap Scoop: UK/Australia Edition to get details on "Coronation Street," "EastEnders," "Emmerdale," Hollyoaks," "Home and Away," and "Neighbours" spoiler alerts.