Amber Tamblyn On Two And A Half Men 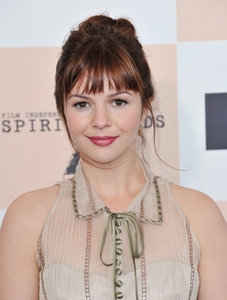 Update: CBS reported today that Amber Tamblyn has been promoted to a series regular.

CBS is reporting that Amber Tamblyn (ex-Emily Quartermaine) will play the long-lost lesbian daughter of Charlie Harper in “Two and a Half Men.” Tamblyn’s character, Jenny, is described as the illegitimate daughter of the late jingle creator and having a lot in common with her father. In an interview with the Hollywood Reporter, the show’s creator, Chuck Lorre stated “I think it would be great to have that voice on the show from a different perspective. The show has had enough testosterone to last a lifetime.”

Tamblyn is scheduled to appear in five episodes of the show this fall and has received the opportunity to become series regular. Tamblyn is no stranger to television or film. In addition to playing Emily Quartermaine #1 on “General Hospital” from 1995 to 2001, she also has appeared on television shows such as “Buffy the Vampire Slayer,” “House M.D.” and “Without a Trace.” She has also appeared in several movies including “The Sisterhood of the Traveling Pants,” “The Grudge 2” and “127 Hours.”

Find out who's coming to General Hospital this month and then catch up on the latest Celebrity News about Simon Cowell's Pregnancy Drama.