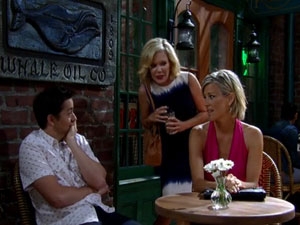 This week on “General Hospital” most of the drama actually revolved around General Hospital, thanks to the hunt for Danny’s bone marrow match, Franco’s new identity, the double-trouble birthing class, Danny’s kidnapping and the friction between Patrick and Silas. Even a newly-returned Epiphany couldn’t reign in all the madness. Along with an insanely high rate of daddy issues it was still mostly doom and gloom in Port Charles with a lot of sad faces.

Lukewarm love triangle.
Olivia looks pretty good for a gunshot victim. Too good to be sleeping with Dante and Lulu in their studio apartment. They can just say goodbye to all of their remaining alone time before the baby arrives. Plus, Olivia’s heartache in Dante’s face is just one more thing for him to be pissed at Sonny about, who just seems okay with whatever happens to him on this one. He isn’t really taking a stand one way or the other about what he prefers, Connie or Olivia, and in fact, it almost seems as if he would prefer the ladies settle the matter themselves and let him know the outcome afterwards. Without Sonny showing some serious interest either way, neither of these pairings brings much heat.

Daddy issues and partners in parenting.
So we learned that while sipping a Tom Collins, teenage Alexis met Sam’s dad, had sex in the back seat and said goodbye to him and her virginity without ever knowing his name. Of course with the few details she did have – bad boy with a leather jacket getting off work – Sam and Spin should be able to get started on a search. At least Rafe and Molly were able to get the letter “J” out of the Ouija board. It was pretty emotional watching Alexis tell her girls about how she got pregnant. That is one rough story to have to relay to anyone, much less your children. No wonder she has kept it a secret for so long.

Franco’s Jason.
Sam wasn’t the only one struggling with daddy issues – this wasn’t exactly the father-son reunion we were expecting for Jason and Danny, although Roger Howarth donning Jason Morgan’s iconic black T-shirt as Franco thinking he was Stone Cold was pretty priceless. Regardless, this personality swap doesn’t bode well for his burgeoning relationship with Kiki, who barely knew him to begin with. Now he’s got other kids to get to know and in true Franco fashion was willing to shoot his “wife” to do it.

Buyer’s remorse.
So when are AJ and Liz going to do it? Without the sex it’s really unclear why Liz chose to be with AJ over Nikolas considering his past and current screw-ups. Sleeping with Carly should have been a deal breaker on their blossoming relationship considering they haven't ever gotten past a few kisses. But the banter between AJ and Carly is just too good not to see more of. Not that they should be together – just leave the possibility on the table. They gossip and conspire with an underlying sizzle that will only grow the longer they withhold hitting the sheets. Besides, they say you want what you can’t have, and with Britt moving in on Nik, the green-eyed monster is moving in on Liz. Quite a conundrum. Britt nailed it on the head when she called Liz out on having a bad case of buyer’s remorse.

Skulking, stalking and back stabbing.
Olivia's graphic vision about Lulu wasn't the only backstabbing going on. Silas and Ava’s lives became more entwined and an easy solution to Michael and Kiki’s incest problem easily presented itself, if anyone knew about it. Makes you wonder how bad the love was between Ava and Silas twenty-one years ago for her to pretend a serial killer was her daughter’s father over the doctor. Just add it to the list of big-time secrets Morgan is keeping from Kiki. He's much better at eavesdropping than he is at playing online poker. But now that he has proposed, this secret should keep, for a while at least.

A sympathetic ear.
One person who seems to have no issues with his father at all, at least one of them, is Michael, who again couldn't keep himself from telling daddy AJ all the dirty details about getting caught kissing Kiki. Is there anything more ridiculous than these two talking about this over coffee at Kelly’s? And then Kiki and AJ chatting about the inappropriate "Q on Q action" at the mansion? Definitely much juicier gossip fodder than tainted relish. We can’t help but think about how much fun the actors are having off screen with the material. This is enjoyable stuff.

Medical problems.
Laura is still worried about Luke and it’s about time she saddled up and went after him. It's obvious that she can’t let him go. Maybe not ever. Monica and Lesley going at it was a nice surprise, and their bickering at the nurse's station was par for the course as gossip and arguing in the hospital halls really trumped patient saving. Are we supposed to believe that known-psycho Franco was able to walk out of GH in some scrubs with a baby cancer patient? It's not that easy to take a baby out of a hospital. Really, it isn't. Beyond the bickering, there were some serious health issues happening in Port Charles. So whose medical condition, new or old, do you think will prove most disastrous soon? Vote below.