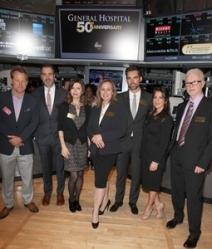 If Port Charles went Hollywood on us…

Things are getting mysterious, in a weird science fiction sort of way. Britt is happy-go-lucky, most often when she’s with Nikolas. Patrick has competition on the staff, that is Silas of course. Carly, who already has bonded with Sam, is working together with AJ for the greater good of ELQ. Pretty soon she and Elizabeth will be co-chairs of the PTO. Meanwhile, Sonny’s busy making love instead of mob wars, with two ex-lovers, oh, and they’re cousins. What has happened to the residents of Port Charles?

Let’s pretend “GH” is a movie we’ve waited all summer for. At the point that Franco has a seizure and then wakes up believing he’s Jason Morgan, you have to ask yourself, is this the movie I came to see? Take our poll and rate it!

Get the scoop on James Franco's documentary Francophrenia about his experience on "General Hospital." Catch up on last week's soaps via the Soap Opera Fan Soap Summaries to find out where things stand in each soap city.

Andalusian Industry Unites in the Face of Pandemic