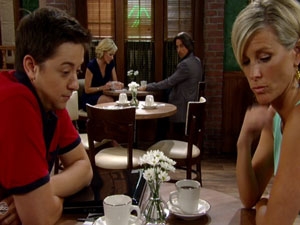 Talk about tension and awkward encounters. This week in Port Charles things got weird as a past love between Ava and Silas was revealed, Brad caught the cousins in a serious lip lock and Morgan got money from his girlfriend’s mother to buy jewelry in an effort to make her stop lusting after her own cousin. Whew. Not as intense as weeks past, and nothing as hilarious as Britt’s incineration of Emma’s doll last week – except maybe Heather’s admission she would kill kittens for a BLT from Kelly’s. But with a lot of characters on canvas – including dead ones – it was good summer viewing all the same.

The crazies at the mansion.
Morgan might not be quite as dumb as he seems considering he at least notices the Qs are nuts. But dishing about Kiki’s lust for her cousin to Ava, then taking money from her to buy Kiki jewelry was just as crazy as anything the rest of his housemates have been up to. That, and his initial assumption that Sonny was at the boathouse to check out his new place instead of having Franco pounded to a pulp. Loved Franco’s suggestion to the “bright and observant” Morgan that they fully embrace the Quartermaine lifestyle and go sailing or poke poor people with sticks. Aside from that, the friendship developing between Tracy and Ava is exciting. They don’t even have to partner up for ELQ, but more drinks and confessions are welcome.

Family relations.
As much as we hate sick baby storylines, there may be a bright spot in this one – will Sam’s paternity be revealed? Better than Sam’s passing suggestion about having a baby with Franco. Yikes!

If Heather ends up being the match it could offer her the redemption she’s been looking for. But Silas and Sam’s visit to Heather revealed so much more than another potential donor. Silas got a recap of all the pain Sam has been through lately, from the Danny drama to the Franco rape fiasco. Silas has some serious demons and now he knows Sam does too. Slowly but surely these two are getting closer, but it might speed up now that Danny needs a donor ASAP. Heightened drama always seems to lead to soaring passions.

Hospital hijinks and flowers in the attic.
Patrick and Sabrina both know better than to make out at the nurse’s station, so where is Epiphany to set these two straight? And as for Nik and the Britch, this is a pairing that could actually work if Nik can get down to the heart of Britt’s issues regarding her evil parents. If anyone can relate, it’s him.

And then there's the hot-and-heavy cousins. Kiki: "If it’s so wrong why does the universe keep finding ways to throw us together?" Because you’re related! Family gatherings are not the universe telling you to go for it. Even despicable Brad knows that, although he didn't think twice before blackmailing the son of Sonny Corinthos - and grandson of the chief of staff - for one night of sex. Have to love that Brad has kept a video of Michael’s strip performance from the Nurse’s Ball on his phone though. Good times.

Ava and Silas.
Wow - history between these two was unexpected and very, very interesting. It appears that someone actually can undo Ava’s cool and calculating exterior, and Dr. Clay was the last person we thought it would be. And she has the same effect on him too. Now that Carly has Spin on the case, Ava’s secrets won’t remain that way for long. Dogs with a bone have nothing on Carly. Anna is also on her case with her sidekick Duke, which will hopefully ramp up their heat. It’s like they went from tortured exes to old married couple without any excitement in between.

Guilt trips.
Ellie’s regret escalated to the point where she offered Spin a baby while Tracy was tortured by her promise to keep Luke’s secret. And poor Olivia felt so bad about Sonny she retreated as soon as Connie and her bandage dress showed up, hell bent on getting him back. Meanwhile, Maxie's baby guilt and poor decisions prompted sage advice from dead sis Georgie. She has had no one to guide her for months and it's still hard to believe Frisco left town doing nothing about it.

There were certainly plenty of bad decisions to go around, so who do you think should feel the most guilty? Vote below.

One person in town who has nothing to feel guilty about is Rafe. After TJ slept with Taylor he has a straight shot to Molly and is still encouraging her to call TJ to work it out. Now’s the time for him to get a little edge and get the girl.

Deception.
We’ll reserve judgment until we see Milo leading a workout without his shirt, but Lucy and Laura’s venture seems a bit thrown together as a way to give these classic characters something to do.

YFN Lucci Claps Back At Haters Who Say He ‘Disrespects’ Reginae Carter: ‘They Don’t Know What I do’

‘Me & The Beasts,’ ‘Olivia and the Shadows,’ ‘The Night Belongs to Monsters’ Win Big at Ventana Sur

Selena: The Series Premiere: Grade It!