Dominoes.
Carly played a deadly game of dominoes this week for which I’m grateful. What a storyline. She hasn't been this selfish and greedy in a long while. The fallout promises to be fun. She should have heeded Shawn's advice and treaded lightly around Sonny. The last time he was this mad over a shooting he drove Claudia insane and we all know how that ended. It was wild, and it looked like Sonny had Carly shaking in her boots. This crime has all kinds of revenge written all over it. The icing on the cake would be if Jax came back and took Josslyn away. You gotta pay to play, and Carly needs to pay. Meanwhile, we're treated to Roger Howarth working his magic. It's as if he's been an integral part of the cast all along. He's humanized Franco and I've started to imagine what a powerful team he and AJ could be in light of their recent comebacks filled with good intentions. His attempted reconciliation with Kiki/Lauren was too moving for words.

The truth hurts.
Alexis slowly came to realize that all is not what it seems in Shawn's world. Talk about tugging at the heartstrings. Alexis had to be ready to fall apart and there'll be no one to help her hold it together. Vote in our GH Poll: Cry Me A River and think about what Alexis should do about Shawn.

Let me know what you think about what went down this week in Port Charles. Are you as impressed as I am with the work of Roger Howarth, Nancy Lee Grahn and Laura Wright?

The results for Soaps.com's 7th Annual Sudzies Winners are in! 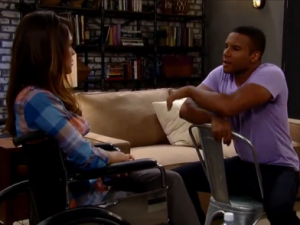 For the most part, this week lacked humor. The show was dark, and for a moment one could have thought they were watching a different soap for characters who seemed not quite who they used to be. Lulu was alien, while Franco had more human characteristics than the entire Quartermaine family put together which made him very likeable.

Come together.
Patrick and Sabrina fans waited so long for these two to consummate their relationship. It wasn’t exactly romance at its best. Luckily the dessert at home was better than the conversation over dinner. Overall, Sabrina lacked enough maturity to compliment Patrick as an equal. It makes Patrick seem like an old fogey and us long for Robin’s return. The only thing redeeming quality is the fact that it keeps Patrick away from Britt.

Roomies, the sequel.
How bad could it be to be alone with Britt? It was bad enough for me to feel sorry for her. All she had to do was mention her evil parents and I longed for a fairytale ending for her. If only Nurse Felix had a better bedside manner and listened more than he lectured, they could find some common ground. Usually when people are forced into close living quarters, you learn something juicy about them. Not the case so far. Taylor will probably teach us a thing or two about Felix…will Britt school us on what it was like growing up a Faison? Felix’s summation that it was a “Rocky Horror Picture Show” and “Austin Powers” mash up was just the tip of the iceberg. Give us more!

“I can cook.”
No Lulu can’t. At least Duke and Emma gave us some comic relief playing dress up along with Alice strong-arming Franco for a few laughs. Now that Lulu has remembered her life, it seems as if this really isn’t our Lulu. It feels like the character is going through a metamorphosis of some kind that we are not privy to. She’s becoming the dutiful wife and is relaxed and less jaded. This isn’t unusual in many cases of amnesia.