Ava and Kiki.
What did Ava need Tracy's money for? This was the million dollar question. Kiki is most definitely her own person and won't be manipulated by her mother. It was funny though how Kiki had no problem getting in on the gambling action to make a buck. Kudos for Kiki for standing up to Ava.

Nurse Elizabeth.
AJ better hope Elizabeth doesn't run back to Nikolas the first chance she gets. She was coddling him during Franco's party. It made their relationship look very co-dependent. These actions deserve to be interrupted by frequent attempts from Nikolas to steal Elizabeth away.

Luke and Tracy.
Luke returned to Tracy to take another shot at winning her over. She didn't accuse him of faking; of course he never regained consciousness before making it to GH. Tracy worried about Luke enough to keep him in the hospital. He already had enough scares related to his lifestyle. It is redundant to see the same old-same old story with Luke if this turns into a message to give up the drink. It was the message Tracy wanted to give him. Those two aren't happy unless they are running each other's lives. Hmmm, sounds like they're soul mates already.

Lulu.
Lulu got it together and remembered what happened aboard the Haunted Star with Stavros and Helena. Unfortunately her epiphany occurred during the party but not at the party. We saw her remember everything. Soon she'll have to give consideration to what recently transpired between her and Milo. It will be interesting to see how awkward their next encounter will be. In all honesty, it will be great to not encounter Stavros again but can Luke survive without a nemesis? The photo montage as she recalled her life was nice, at least very welcome after listening to the painstaking details. The flashbacks to Stavros were creepy. Maybe Franco doesn't seem so bad now. Of course we had a reincarnated somewhat different Lulu wake up the next day. This shiny happy person even raised Tracy's eyebrows. 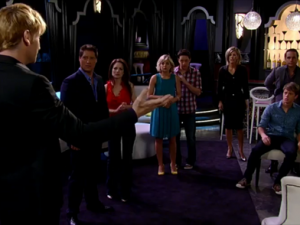 “GH” brought it on with a multitude of storylines clashing into each other. Between Lulu’s revelation of who she was and the mysterious blond-haired man being revealed, it’s possible too much top-notch drama was going on at the same time.

Francophenia redo.
He’s back, and soap fans aren’t happy for one or more reasons. It is not exactly what the doctor ordered. Fans are asked to accept Roger Howarth as Franco instead of Todd. He only just left and now returned as some crazy dude who was scarier than his original character. It’s not easy for a viewer to regroup as quickly as the actor themselves and pull off believing what is going on. This is groundbreaking stuff though, never seen before in soaps. Personally, the change is challenging and great things should be expected even though I’d hoped greatly that he’d be someone different. A blast from the past would have been more desirable, other than Jason’s supposedly dead twin – perhaps another Quartermaine. In the end it seemed an obvious casting choice for Roger Howarth though. Setting aside his ability to ooze wit and charm appropriate for the part of Franco, Howarth is paired up with Kristen Alderson playing Franco’s daughter Lauren (aka Kiki). The characterization of Kiki borders on who I might imagine Franco’s daughter to be but Alderson’s work comes up diluted. Perhaps over time she’ll kick it up a notch in the coming weeks to be less Starr-like and compliment the emergence of Todd to Franco.

Howarth’s first challenge as Franco was the party. It turned out to be a memorial to Jason in some odd sort of way. It was uncomfortable the way most of the loose ends were tied up in an attempt for Franco to look almost human. There still was the little matter of killing some people and kidnapping some people who might land him in jail soon. The storyline lacked a conceivable motive as to why Franco returned at all but those reasons might be waiting in the wings. The party was a letdown if Franco’s only purpose was to make amends with Sam and Michael. At least there were a few cans of worms to open. Will Franco move in with the Quartermaines and offer us performance art with the similarly returned from the dead golden boy, AJ Quartermaine? Hopefully we might be entertained with a witty sibling rivalry between the two similar to the likes of Tracy and Alan back in the day.

Even if you believe some of Franco’s rhetoric exchanged with Carly, vote in the GH Poll: Comeback Kid and tell us why you really think Franco returned to Port Charles.

Waiting for the punch line.
What the heck happened to Pickle-Lila and Pickle-Eddie, and why? Also, AJ should have realized that Lauren was not the only missing heir with shares now. Franco owns part of ELQ too.