For the full list of all nominees, be sure to read Soaps.com's 40th Annual Daytime Emmy Award Nominations. And relive one of the Haunted Star's past parties in our Throwback Thursday GH Poll: You're Invited.

Join us on Twitter @soapoperafan and Facebook. Come tweet and Facebook with us about "General Hospital," all the other soap operas, "Dallas," "Glee," "Grey’s Anatomy," "Pretty Little Liars," "Revenge," "Vampire Diaries," and "Venice The Series!"

“GH” received only one nomination in the Supporting Actor category for this year’s Daytime Emmy Awards. Fan favorite Bradford Anderson (Spinelli) was recognized this time around.

In these scenes, his character confronted Maxine (Jen Lilley) for marrying Matt (Jason Cook) when she didn’t love him. After he demanded she show him some gratitude, she stormed off and he was left to vent to Mac (John York). 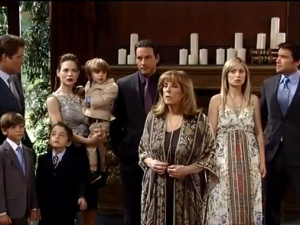