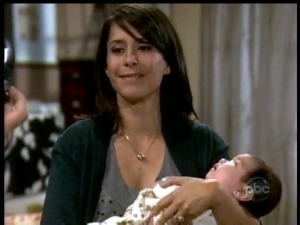 Her lips are always moving. (Soaps.com)

I know I’m supposed to be all caught up in the drama that’s about to unfold in the OR, but it’s all too confusing to me at the moment. I will watch with an open mind, of course, and eventually fall in love with the drama as I normally do. But there is such a thing as too esoteric and that initial opening scene with Patrick racing to the OR was it for me. I’m still trying to figure out “Seven Pounds” for crying out loud, and now this! So, for the moment, I’ll concentrate on the other scenes from last week that moved me to pound on my trusty keyboard with the worn-out letters.

First off – Robin. I know, I know…postpartum depression is a real and painful condition that robs families of the joy they should be feeling at such a blessed time. Having said that, I feel nothing but contempt for Robin at the moment. I’m embarrassed to admit it, and I hope one of you can talk me out of it, but all I can think of is the expression ‘be careful what you wish for’. My frustration with their immediate possession of a spacious new house is directed at the writers, however. Ahem – I can suspend disbelief with the best of them, but did even a day pass before they moved in? I loved the scene between her and Jason. Make that, I loved how Jason handled the conversation, not necessarily Robin’s denial of what he was telling her.

Could Jason be any clearer to thick-headed Sonny? It’s like he’s yelling, “I have no choice but to help the Feds put you away for life,” and Sonny’s saying, “I don’t really care.” Enough with the warnings Jason, just do it, I say. I’d have chosen Spinelli over what’s become of Sonny any day, wouldn’t you?

I’m looking forward to Carly’s benefit to honor Michael. This whole Michael storyline has brought out a softness and vulnerability to Carly that I’ve not seen before. I actually felt her pain last year when she first lost him, and I feel it now as her eyes glaze over when she thinks of him. I also love the newfound truce that she and Sonny have carved out and how she told Sonny to forgive himself. So, bring on the ball, or whatever it is. Too bad I have a sneaking suspicion that it’ll end badly.

Alexis's inquisition of Nikolas regarding his feelings for Nadine was annoying to me at first, but I came to appreciate it because we finally got to hear what he's feeling. Namely, not much. He wants to love Nadine, he doesn't love her. Alexis is right that he shouldn't send her mixed signals. This can't end well for Nadine. I was happy to hear some dialogue about the upcoming Inauguration, weren't you? Remember back on Election Day when we were all wondering if GH would work it into some lines? Well, they didn't, but at least they touched on it last week.

Am I the only one who got a twinge of interest when Liz and Matt bantered a bit on Friday? Hey, they're both available after all. I'm not thrilled at the idea of Lucky and Liz trying to get together yet again, and I don't want Matt to come between Maxie and Spinelli. So, why not?

My line of the week came from the wonderfully playful mood that Ric was in when he confronted Claudia for standing him up at Jake's. When Claudia asked him why he thought she was lying, he sniped, "Because your lips are moving."

Note: Next week's Blogspittle will be written by Soaps.com's Lori Wilson because I'll be covering the 2nd annual Soap Cruise. I thank Lori for giving her two-cents worth on all things GH and will return to my post by January 27. Bon voyage!-Julie Clark Robinson