Your secret's safe with me.
One of the most entertaining short bits this week was when Ellie considered a "what if" scenario if she told Spinelli that Maxie's baby was his. It was probably the least annoying scene nuLulu's been in since they've started flashbacks. There was no indication this was a dream really, until the scene got a bit peculiar. By the time Lulu pulled out a gun to shoot Maxie, and shot Ellie instead, we kind of had a clue. Man, Ellie decided to wrap it up fast and took a pass on disclosing to Damian what was going on with that baby.

TJ.
It was funny (not ha-ha funny), that TJ was the most violent thing on the show. I don't know how much I like the direction of this character right now. Maybe they want to work on another PSA type storyline, but it was disconcerting. TJ has been a likeable enough character and a straight enough shooter from hanging around Shawn and Molly. The way the scene played out with TJ deliberately luring Rafe to Kelly's was too seedy for my tastes. Molly thought so too. Now TJ has to win her back after she dumped him as her date for the prom.

Not the way I remember it.
Luke and Laura, yes, it was not the way we remembered it either. It was a nice gesture to kiss, but it was right for them to move on. If Laura is staying in Port Charles with Scott, where will they fit into everything? Alexis probably needs a lawyer for the firm, since Diane Miller isn't full time but is there enough crime to keep him busy? The PCPD is a hub of activity sometimes, maybe a snarky public defender would do. Oh, GH probably needs a good lawyer with all the mishandled tests and the potential for malpractice at any moment.

Exactly the way we remember it.
Duke and Anna sat at Kelly's as a couple and enjoyed a jar of the new Pickle-Lila. The two of them were yummier than the speculation on how good that imaginary relish must really taste.

An afterthought.
As sweet as Luke and Laura saying goodbye to each other was, the next Scott and Laura meeting wasn't. What the heck? Run, Scotty, run! Oh, by the way, Luke and I said goodbye, let's set a date to get married. Yeah right.

There was a lot of dialogue bouncing from fun to mature, or just plain crazy. Take the GH Poll: Favorite Dialogue and vote for your favorite verbose scene on "GH" this week. 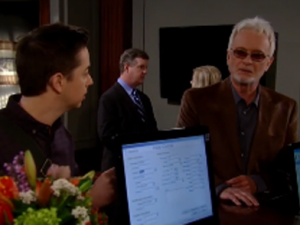 If you can’t beat them, join them. So the saying goes, and it applied to many characters in Port Charles this week.

The four stooges.
Tracy, AJ, Spinelli and Luke took their show on the road. Nikolas and Elizabeth were really just along for the ride. After Tracy found out why they were staying in the hotel they were in, it was all downhill from there. No one in their right mind would even want to be a fly on the wall for that fiasco. Tracy was funny when she was trying not to check out all of Nikolas’ ink. She thought he should wear a shirt instead of walk around like a beefcake from some afternoon soap opera… Nikolas thought Tracy probably watched a lot of those. Of course she admitted to watching only one. If you were to be a fly on the wall, that hotel lobby was probably the best place. Instead of watching AJ flop around like a fish out of water during his weekly panic attack, you could watch Luke and Damian square off for title of best treasure hunter. Who would have thought Spinelli was no match for Luke Spencer when it came down to hunting a mystery heir? Luke was sporting a pair of vampiresque sunglasses indoors. He probably can smell Q blood at a considerable distance, day or night. By week’s end, Tracy being holed up in Nik’s room by two goons just showed us that this relish war can’t get any crazier. To quote Tracy, “What in the name of Richard Simmons went on here?”

Friends of Spinelli.
Carly and Michael had the pleasure of introducing us to the newest cyber-geek on the block. Sonny was probably glad he missed that. All hail to The Jackal, Woodrow wasn’t as cyber-savvy as Damian but he got the job done.

Try to remember.
Okay, I’ll preface by saying, I don’t hate nuLulu, but they’ve replaced all scenes of old-Lulu with nuLulu as she flashed back and remembered her history. One could understand the confusion if they didn’t do that, but it is annoying because they’ve decided they need to use so many flashbacks all of a sudden. Just write the girl some new stuff already and be more selective in the flashbacks.