Ellie and Spinelli.
There may have been a lot of love in the afternoon this week but it is apparent that these two aren't in it deep enough. Spinelli had walked away from Maxie to keep his word to Ellie. She repaid him by being dishonest to thwart Maxie from keeping secrets from Dante and Lulu. It was more than dishonesty, she used Damian. Maxie shouldn't let her off the hook so easy just to continue on with this charade. If she wants Spinelli, now's the time to do something about it.

For shame, Sabrina.
Britt must know if you give someone enough rope...and Sabrina better stop hanging with her rope distributor Felix. Those two need to focus on their nursing careers or they'll be out of a job soon with Ellie (if she ever gets caught).

And the truth comes out.
All speculated that Britt didn't plan on going through with the abortion. The best though was when viewers were given a fly on the wall moment so to speak. To hear her tell the nurse at the clinic she really wasn't going to do it anyway was priceless. Unfortunately the real truth could have come out if Maxie played her hand a little longer and Ellie marched down to the clinic to count fertilized embryos. Many of us are thinking it. There'd be nothing sweeter than Maxie having something on the not so good doctor if a fertilized embryo is missing.

Johnny.
If viewers are lucky, maybe there will be the occasional visit to Pentonville. Without Johnny "GH" loses the mob storyline. It is the perfect way to bring Morgan back into the picture too. Everyone's been worried about Michael all these years and look at who is off getting into trouble.

Sweet mystery of life.
Who pray tell is Betsy Frank hiding in her house? The possibilities are endless and hopefully it will relate to the show in more ways than as the catalyst for the Quartermaine Pickle-Lila wars.

This week had enough noteworthy tidbits to compile the GH Poll: Best Reveal? Vote for your favorite reveal or entertaining moment on "GH" this week.

Don't miss our Jimmy Deshler Interview to find out how he got the part of Rafe. Take a moment to vote for your favorite characters in Soaps.com's Seventh Annual Sudzies. 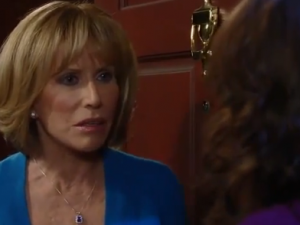 Like fine wine, it was a very good week. It was hard to decide which bottle to open. There were some big reveals this week and more fun than you can shake a stick at.

Go Lulu!
Dante needs a little spice in his marriage and absence does make the heart grow founder. This is a fun little storyline allowing Lulu and Dante to stay married hopefully but keep everyone on their toes, like Max and Milo. Kudos to Milo for sticking up for Lulu and making her feel safe. Dante should be worshipping the ground he walks on right now. Max should really get a clue about Sonny. After all he’s been through with Kate slash Connie, it is likely he’d understand Lulu needing somewhere safe to hang and could probably talk Dante down. It is obvious the apple doesn’t fall far from the tree though. Let’s react first and look for solutions later (both Dante and Sonny punched someone this week). He’s a detective in the PCPD. Don’t they receive some sort of sensitivity training? Of course Sonny always has something else to worry about…and thank goodness Dante is a grown man and can take care of himself because someone needs to be looking after Morgan. What happened to all Jax promised in that area?

Go Carly!
Hot diggity dog, you go girl! There is no reason why this shouldn’t work this time around if given a chance. Sobriety must really impress Carly. Talk about location, at the Quartermaine residence in AJ’s room like two teenagers. Just when you thought it couldn’t get any more awkward Monica came to check on him. Doesn’t he have his own wing with some privacy? I know the woman’s a doctor and all, but to take his pulse was crazy. She has her own personal experience in this arena; it should have been obvious what was going on. Carly expecting Monica to bring milk and cookies thinking she was Elizabeth was a hoot. Just when you thought it couldn’t get any funnier, Elizabeth showed up. Hands down, the look on Monica’s face when Elizabeth showed up to see AJ had to be the funniest thing on Daytime TV this week. Monica arose to the challenge and snuck Carly out of the house. The only way this could have been more insane were if Tracy were at home. Hopefully Carly didn’t scare herself and run to Sonny to put AJ behind her.

Lucky?
Elizabeth really needs to move on. If Lucky has a problem with her and Nikolas after all this time then he needs to move his butt back to Port Charles. Decisions, decisions…AJ or Nikolas? Taking up with AJ is disingenuous if she’s only doing it because she thinks being with Nikolas hurts Lucky. Who’s she going to hurt when Nikolas kisses her again and she doesn’t walk away?