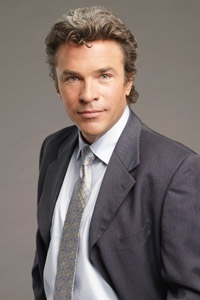 John J. York, better known as Mac Scorprio to General Hospital fans, has lent his voice to a good cause – the Crohn’s & Colitis Foundation. The actor was diagnosed with ulcerative colitis when he was just 15 and has suffered from a mild case of IBD (inflammatory bowel disease) ever since. As such, he recently donated his time to record several radio public service announcements promoting the ‘Take Steps” fundraising walks currently being planned in over eighty cities this spring and summer.

John became active with the foundation after learning that his daughter could be afflicted one day if she inherited the gene from him. He would like to do whatever he can to help the Crohn’s & Colitis Foundation come up with a cure and help 1.4 million Americans who currently live with the chronic pain of digestive diseases.

The “Take Steps” walks in 2008 raised nearly $6 million and over 30,000 people took part. With John’s help, the goal is to increase those numbers this year, so that research, education and support can continue. To register, go to Take Steps.org.

Soaps.com would like to thank John for his public service and wish him continued success in the face of adversity.