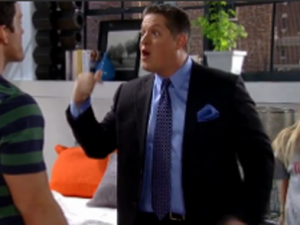 Ellie in the know? (ABC)

This week wasn’t so harried on the set of “GH” which turned out to be a nice reprieve. A few core stories were given the time they needed to develop at a more comfortable pace.

Brenda. Goodbye.
Oh, she came clean this week. Michael had more maturity in his pinky finger than Brenda Barrett had in her whole body. He actually had more than Brenda and Carly put together. Sonny didn’t do too bad himself either. He said goodbye and didn’t need Carly’s help, even when she arrived to the airport too late to catch Brenda. It’s uncertain what could have happened if she were on time. Be thankful. It could have involved the slinging of airport food.

Connie. Hello.
It’s Connie and Maxie together again. Connie needs Maxie. There’s no one else in Port Charles, let alone the world, that can identify who owns what bling at 60 paces. After making Maxie feel somewhat comfortable around her again, Connie had an opportunity to make things right with Milo at the Floating Rib. He was as fearful as Maxie was of new Connie. He probably thought she was going to drag him to a back room and have her way with him. She’d be a much better match for Max right now since Diane left him. Hopefully he’ll get over worrying about what the boss thinks at some point. That would make for a juicy storyline. Lucky for Milo a confused Lulu was planted by his side later at the bar which more than made up for his night.

My hero.
Lulu’s home, at least that is what everyone told her. She took matters into her own hands and escaped from GH to avoid her family. The coolest thing about this so far is that we get a sneak peek into the lives of the Giambetti brothers. Well, the part that doesn’t involve cleaning up after Sonny Corinthos. It only confirms that sweet Milo is in the wrong line of work. Max really needs to lighten up and cut his brother some slack.

The Prince of Love.
This week Nikolas dispensed relationship advice to anyone who graced his presence. He took the time to give Scott Baldwin blessings to marry Laura. He also told Elizabeth how AJ had enough feelings for her to mess things up. Too bad he didn’t try to get Tracy and Luke back together…and it is too bad he didn’t steal a kiss from Elizabeth when he had the chance. It’s a wonder all the GH nurses aren’t lining up to give him his sponge bath, including Felix. He’s missing out.

The Princess of Love.
All of a sudden Sabrina is quite the siren. She needs to go visit Nikolas so he can tell her to tone it down a bit and give Felix all those sexy clothes back. Too much has changed about Sabrina. The new Sabrina is missing her warm side. She hasn’t been as endearing. Maybe she is hanging with Felix a little more than she should. It seems weird how comfortable she and Patrick are together too. They haven’t spent hardly any time together and they’ve turned into two clingy almost-lovers.

We get it.
Okay, Spinelli likes kids. Ellie likes kids. Geez, I wonder where we go from here. What we don't get is why Ellie was doing more detective work than Damian. At this rate Helena or Stavros is in danger of returning to Port Charles before the Quartermaine heir is found. Shame on Ellie for manipulating Damian to tear down Maxie. Whether she knows it or not, Ellie is ill-equipped to deal with Maxie.

We didn't get it.
The topic of abortion is one that's been raised on "GH" before. Unfortunately, this time around could not have been more awkward. Emma's had her mother taken away from her, presumed dead, and now, after the news of an impending baby sibling was thrust at her everything became so nonchalant. Patrick was ready to repeat the mistake of going on a date with someone he hardly knows again and leave his daughter with a new sitter worrying about what happened to her little baby brother or sister.

Crocodile tears.
It would have been more interesting if Felix answered the door when "Dr. Westscorn" arrived at Patrick's. It was hard to tell if she was sincere, standing in a pool of tears at his front door. She had just finished terrorizing Ellie Trout and like a light switch, flips on to her sensitive side. Only Felix had the right bedside manner for that drama. It came none too soon when he complimented her for her "nice play" on breaking up Patrick and Sabrina's date when he came to babysit.

Let's give it up for...
A lot of actors are shining in Port Charles as of late but special mention goes to Marcy Rylan in her portrayal of Lulu. The writers have done a great job of bringing in a new Lulu at the right time. Rylan is working it.

There were some strong performances this week. Tell us your favorite. Vote in Soaps.com's GH Poll: Favorite Scene.