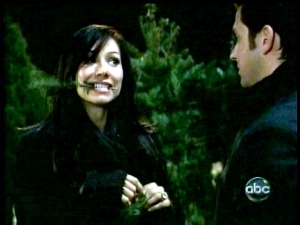 Soaps.com receives many emails inquiring about the fashions of the citizens of Port Charles. As always, we go straight to the source and speak with Mary Iannelli, the head of wardrobe for General Hospital. Here’s what you wanted to know:

Jenn: Nadine wore a white or cream colored hoodie with a flower cutout on October 8 or 9. My birthday is January 19 and I would love to ask for it for my present from someone!!!!

A: Nadine’s sweater was by Moth from Anthropologie.

Kayla: I’m wondering, where does Claudia get her jacket she wore on December 16? It was dark brownish (or black) and it was a little shiny, with sweater-like trim.

A: Claudia’s jacket was by Bebe.

Jen (Shelley and Marsha): Can you tell me where to get the sweater Robin was wearing on the December 17 episode? It was a greenish blue with flowers on the left shoulder.

A: Robin’s sweater was Plenty by Tracy Reese from Bloomingdales.

A: Robin’s sweater is by Liefs Dottir from Bloomingdales.

Georgi: Liz was wearing a red sweater with a large white windowpane pattern on it during the week of December 15. Loved it!

A: Liz’s sweater was by Trouve from Nordstrom.

Elisa: On December 17, Maxie wore a cream sweater with ruffles at the top and it tied at the top. Who makes it?

A: Maxi’s sweater was by Juicy from Bloomingdales.

Soni: I was wondering if someone could tell me where the hot pink dress Maxie was wearing on August 29 is from? It had strings tying to the back over her left shoulder with a gold belt across her waist and a flower-looking thing on the left side where the strings attached.

A: Maxi’s dress was from Barney’s New York.

Ann: I love the plaid jacket that Lulu was wearing on December 18. Do you know the designer or where it is sold?

A: Lulu’s jacket was Jack by BB Dakota from Nordstrom’s Brass Plum.

Amanda: Hello! I’m curious as to where Sam’s pants are from that she wore on December 18. Thank you!

A: Sam’s jeans were by Paige denim.

Janice: Can you please tell me where I can buy the necklace that Carly wore on December 22?

A: Carly's necklace is from Nordstrom.

Tina (Melissa and Kelly): Hello, on the December 23 episode Maxie wore a red dress with a red zebra clutch. I was wondering where I could find this outfit?

A: Maxi's dress is from Anthropologie, her clutch is Alfani from Macy's and her coat was from Nordstrom.

Laura (Pam and Debreen): Where is Maxie's dress from that she wore on December 26 for Robin's wedding? I LOVE IT!

A: Maxie's dress is by Nicole Miller from Nordstrom.

Joan: I Loved Robin's wedding day necklace (from December 26)! Where could I get it?

A: Robin's necklace was from So Good jewelry.

When you have fashion questions for Soaps.com, read through our existing wardrobe articles to see if we've already answered your question. Simply type the word 'Fashionista' in the search box in the upper right corner of every Soaps.com page. If you don't see what you're looking for, go to the GH Wardrobe Question Link and let us know. Please include as much information as you can recall, such as a description of the item, and especially the date it aired. We will get back to you as soon as we hear back from our contacts at ABC.