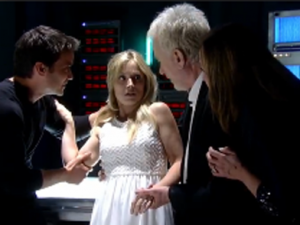 It was a mass exodus at the PC airport this week but a few characters came back home. The names are the same but some of the faces and personalities have changed.

Lulu Cassadine?
Lulu returned from a deep freeze and set off for Port Charles with people she had no recollection of ever knowing. It might have been an unconscious decision on her part to forget who they were after listening to their verbose impassioned goodbyes in her deep sleep. There were so many words, too many actually, that were said to Lulu while she lay on that eerily lit slab outside her ice chamber a few feet away from the dead Helena Cassadine. We can only surmise Helena’s body was within earshot unless Luke jettisoned it into outer space when no one was looking. It’s probable that the Cassadines are equipped with a device that can do that on the island. Those scenes could have been better played if we heard Helena’s thoughts as she listened to Luke talk about ice fishing with Lulu. Oh the irony. Helena always appreciated the irony in things. Alas, she is gone, but apparently not gone enough for anyone to tell Nikolas. Maybe I missed it, but I never heard the words spoken, “Your grandmother is dead.” Is Alexis really waiting for proof or is she waiting for Luke to do the honors?

Seriously, what gives with Stavros and Helena? Stavros has come back from the dead twice now and Luke and Laura froze him and left? They should travel with Lucy Coe. She knows how to deal with the undead.

Sonny’s women.
While Lulu broke Dante’s heart on Cassadine Island by forgetting who he was, Connie dropped back into Sonny’s life so she could drop back out of it. Wow, those Corinthos men are batting three for three in the jilted lover department. Even more startling than three sexy men without a woman, is Carly and Olivia going to bat for Sonny. Carly could actually learn something because combined Connie slash Kate has an agenda and it is all about herself and not a man. Somewhere in all that drama there seemed to be a misplaced PSA about locking up guns for safety before Carly tried to talk Sonny into killing Brenda. AJ worked a different angle though as he encouraged Brenda and Michael to embrace whatever was going on between the two of them that Michael couldn’t remember. This would allow AJ to revel in the discomfort he knew it caused between Sonny and Carly. This AJ is fun. Too bad he didn’t go to talk to Heather Webber instead of Spinelli.

Pickle-Lila.
This was one of the more enjoyable storylines of the week. AJ in charge of ELQ is enlightening. Someone’s been up late at night reading important documents. ELQ owns the name Pickle-Lila? It would be nice to see this one go to trial, TAQ vs. ELQ. Tracy would probably find out that she owned a jar of pickle relish once and since it had been consumed that would be the end of it. Sounds boring to us but that poor judge at the courthouse needs to hear a normal case that doesn’t involve vampires.

A day in the life of a nurse.
Now who has the attitude going on? BFFs Sabrina and Felix were working harder at pressing Britt's buttons than at nursing. They spent more time together than any other couple in Port Charles this week. Elizabeth and Nikolas was a close second as Liz paraded around as his personal nurse. Who can blame her? He was shot in the chest. There's no telling how many wound checks need to be done. The viewers can appreciate this attention to detail.

Britt appeared to have only one patient, Maxie. Aren't there any other pregnant women in Port Charles besides her and Britt? Meanwhile Ellie is all up in Maxie's business. Obsessed with babies much? All of a sudden she's going out of her way to deliver lab reports like a nurse in obstetrics.

So glad we had this time together.
Finally Bobbie and Dr. Noah Drake flew out of Port Charles. Lucky for Bobbie, Noah was reporting to Seattle General. This little tidbit of information was pleasing. There is an extension of Port Charles in Seattle with happy folk, unlike the unpleasant extension that Cassadine Island and Switzerland had become recently. No frozen or comatose bodies, maybe just a place where real hospital work goes on. If Bobbie's son knows what's good for him, he'll stay away from Port Charles. Bobbie left Scotty in a hot drunken mess though and it's highly unlikely that Laura will be flying out of Port Charles with him anytime soon with Lulu all messed up.

Hopefully some will stay awhile. Missing anyone yet? Vote in Soaps.com's GH Poll: Please Don't Go and tell us who it is.

Check out the next new face in Port Charles with Bryan Craig cast as Morgan Corinthos. Read about the arrest of Hugh Jackman's stalker in Soaps.com's celebrity news.