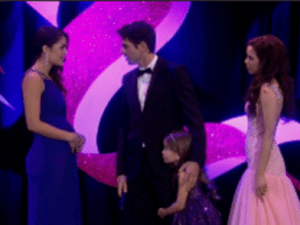 There were a lot of exciting moments. It didn’t seem quite possible, but by the end of the week it felt as if a month of storylines had flashed before our eyes. As much as it was nice to see some of them move along, a few seemed to be wrapped up in record time.

Let’s hear it for the Nurses’ Ball.
The ball carried on into the beginning of this week bringing entertainment, disappointment and craziness. Starting with Frisco, one can only say, he can really get on a girl’s nerve. What a disappointment he was this week, first proposing to Felicia in a crowded ballroom, then ditching his only surviving daughter to go lick his wounds someplace other than Port Charles. It was a little confusing though when Felicia said she should have told him weeks ago. It didn’t seem like she knew weeks ago that she was sure. See, those public proposals can be a real turn off. It made it too easy for Mr. Marbles to seal the deal.

If Mr. Marbles didn’t scare fans away, Richard Simmons made another appearance trying to ruin Lucy’s night. She’s a vampire slayer, can’t she handle Richard Simmons? Poor Richard, hope he liked his return to “GH.” It was funny the way he was carried out by Milo and crew. It was even funnier when Lucy announced, “It’s not an act; Richard Simmons just came out of the closet!”

The ball was a huge success. The entertainment was great. Tracy Quartermaine’s dress was not. It had to be said. It was more painful to watch Tracy try to move in that dress than it was watching Richard Simmons torture Lucy.

You’re having my baby.
Ouch, there’s a surprise. If Patrick thinks Britt isn’t mother material, wait until he meets the baby’s grandparents. It probably didn’t come as any surprise that Faison was Britt’s father, who else could possibly be involved with him but evil Dr. Obrecht. It was bizarre to watch her and Britt interact. “Sit, stay awhile, here’s a glass of cyanide and sodium pentothal, I mean warm milk.” Curdled milk is more like it. There’s nothing remotely warm between the two of them. It’s hard to make fun of growing up a Cassadine now after envisioning life with Obrecht and Faison.

One thing led to another.
Viewers are probably all on the same page that nothing happened between Brenda and Michael. Brenda is going to milk the incident for all its worth to drive Carly batty. It is hard to figure who was getting more bang for their buck out of the story though, Brenda or AJ. Brenda gloated right up until Carly was about to call Sonny. Meanwhile AJ was like a kid in the candy store reveling in Michael’s tale of supposed conquest. Scott was a welcome addition to the Carly bashing Brenda to Bobbie moment. It’s uncertain which was funnier, Scotty keeping Carly’s gaze so Michael could sneak out of the Metro Court or Scotty sounding as if he’d like a piece of that action when Carly exclaimed Michael slept with Brenda Barrett. Come to think of it, that pairing would most certainly rock Port Charles. Brenda needs a lawyer boyfriend to file frivolous lawsuits and to defend her if she takes out someone’s eye with a dinner roll at the next Nurses’ Ball. Oh, wait, that was Scotty holding Bobbie’s hand at the Metro Court. He might already have a backup plan if that Luke and Laura trip turns out how he thinks it will.

Outside of all that drama, AJ was lucky to steal a kiss from Elizabeth at the ball. Monica was desperate for that to lead to something more. She already heard wedding bells. He had better get moving on that since it appeared that Nikolas was a little bit more than luke-warm after regaining consciousness.

Unbelievable.
"Reports of all of our deaths have been exaggerated, have they not, at one point or another." - Stavros Cassadine

This is how you know "GH" has gone back to its Luke and Laura roots. Dead men walk and some Cassadine is freezing stuff. It might be unbelievable that Stavros Cassadine is alive, again. However it is more unbelievable that Helena Cassadine is dead at all. I suspect that woman is really a Time Lord and it's time for her to regenerate. It's doubtful she'll get that 2.0 upgrade that AJ got. Alexis wasn't buying that she's dead yet. She's ready to count Helena in for the next Cassadine family reunion, or whatever they call their family gatherings. Sure, let's have a laugh at that vampire storyline now that we can't get enough of Luke and Laura on a Greek Island with a hidden cryonics lab filled with frozen people.

Who can laugh at all that? Really, the most unbelievable elements of "GH" this week were the humanizing of Dr. Obrecht rocking at the Metro Court (loved it though) and Helena eating a salad (thought her food had to be moving first). Oh, and that bit about Frisco running off to help the WSB save Luke, Laura, Dante and Lulu. How effective is the WSB exactly? Don't they have the Cassadine Island on their radar? Meanwhile, according to Obrecht, Jerry Jax is on the horizon. He's died more times than all the Cassadines put together. He might have to save Lulu if he's not in cahoots with Stavros.

Yes, it was a very good week, like getting two weeks in one really between the Nurses' Ball and the Cassadine Island drama.

As the golden anniversary continues, has "GH" remained true to itself or are you finding some of these revelations too far out there? Vote the GH Poll: Tell Me Another to cry foul on an unbelievable storyline of your choice.

Soaps.com wonders if you remember Luke's past face offs with Stavros Cassadine in the GH Poll: You've Died Twice. Read about Rob Lowe in HBO's Behind the Candelabra.