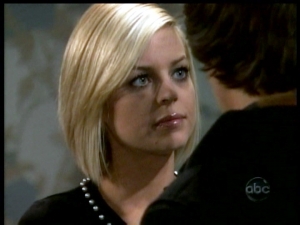 I don’t care that Sonny’s ship blew up and I don’t even care that Jason was the culprit. I don’t care that Claudia’s gargantuan secret could come out at any given moment. I don’t care about Carly’s apologies, or Jax’s newfound resolve to give his marriage another go. I don’t care that Robin finally has everything she could’ve ever asked for but is too depressed to enjoy it or that Nadine got a spiffy new suit. I don’t give a rat’s behind that Luke managed to get Johnny out of jail or how furious Anthony’s going to be about it. Couldn’t care less about Lucky’s accounting foibles, Winifred’s wide-eyed betrayal or even Olivia’s departure from her auto mechanics career. For the moment, at least, one other storyline last week trumped all else for me. Spinelli.

As the week went on, I silently (and then not so silently) urged Maxie to shut her pie hole and butt out off Spinelli’s apparent kindred-spirithood with fellow geekster Winifred. She didn’t give her ‘very best friend in the whole wide world’ the benefit of the doubt or even a little room to breath air that didn’t come from her lungs for so much as a minute. Is the girl blind? Could she see the hurt in his eyes as she ranted on about how stupid his cyber world compadre was? Lord knows that she has benefited from his expertise to get her out of every pickle she’s managed the put herself in for the past year. Yet when that same expertise arrived in the form of an unfashionable female, she grew horns and spit fire.

Yes, I understand that she felt threatened.

Yes, I realize that she is protective of Spinelli.

I might even be willing to acknowledge that she was actually acting on instinct (rather than the green-eyed monster) in an effort to thwart the impending doom that pretty much came to fruition by week’s end.

But did she have to use the one thing that Spinelli longed for in order to reach her goal? When she told him that she needed him and they found their way to her bed together, it started to seem to me that she truly wanted to be there. Once it was over and sweet Spinelli was so moved that he started to marvel at the wonder of the universe, I was hoping that she’d just keep her trap shut and let him enjoy the moment. But no, the first thing out of her mouth revealed her true motivation – to get him away from Winifred.

The exchange that followed was pure soap magic. His slowly unfolding realization that quickly turned to disgust was matched by her attempt at backtracking and finally lashing out. It was as if all of last year disappeared and she was the same insecure mess who gave drugs to Lucky and slept with Logan on a bet to hurt Lulu. All in one, short scene!

We didn't get to (or have to, for that matter) see how Spinelli was feeling after he left her apartment, but I was glad to see how sorry Maxie instantly was. I found myself eager for her to reach him and tell him that she didn't mean any of it, feeling somewhat sure that she could get through to him. But it didn't happen that way.

Next week is shaping up to be huge for General Hospital, but all I really find myself caring about is Spinelli. How crestfallen he must be, and to land in prison all on the same day?

Prior to last week's heartbreak of a cliff hanger, my line of the week was going to be when Luke told Liz that blood is thicker than Carl Pervis's IV drip. But that just seems to slapstick to me at the moment. So, I'm going to go with a biting exchange that Maxie and Spinelli had earlier in the week. She said, "I thought you were smarter than this!" Spinelli sadly countered with, "I though you were better than this."

Well said Damien. So did I!

So there you have it guys, everything that meant anything to me during the first week of 2009. You?