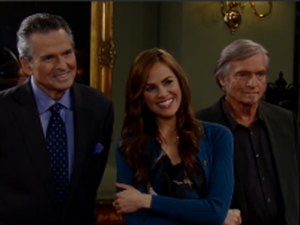 “Imagine how many lives have been touched, how many stories have passed through this place in 50 years.” – Elizabeth Webber

Celebrating 50 years.
This week the 50 year anniversary celebrations continued in high gear. Compared to other major “GH” milestones, this particular year stood out in the way of great storylines that tastefully encapsulated 50 years of history into a short period of time. The writers were able to keep relevancy between the old and new happenings in Port Charles. As outlined by Patrick in his tribute to Steve Hardy during Audrey’s visit, these are the stories that “General Hospital” is known for and it is hard to find a better week of late where that legacy was honored as much as it was this week.

Stories of rivalries.
Port Charles abounded in rivalries from love rivalries to bitter family enemies. While Luke and Laura met their fate up against the evil Helena Cassadine, Carly’s willpower was tested when Jax announced his engagement to her rival, Brenda Barrett. It’s a sore spot for Carly and unfortunately she can never do the right thing and let the chips fall where they may without her intervention. We could revel in her correct assumptions that Brenda was just not into Jax though. The parallel scenes of Jax at Carly’s and Brenda at Sonny’s was just too much, but in a good way. The viewers knew it from heart but it was worth the wait to see it happen again. It didn’t go off without a hitch for Brenda. Sonny was impressive with his obligatory congratulations almost followed up with a “Don’t let the door hit you in the…”

Meanwhile Alan Quartermaine, Emily Cassadine and Rick Webber visited Tracy and Monica from wherever it is ghosts hang out. The haunting bit might have gotten too stale for viewers if not for the addition of Emily and Rick. Rick and Alan buried the hatchet and Emily persuaded longstanding rivals Tracy and Monica to make amends for Alan. The two hugged (awkward). Afterward Monica was sure there was something in Pickle-Lila making them delusional. It was a cleverly done nostalgic scene, the kind of thing you’d expect to happen at the Quartermaine’s.

Stories of love.
There was so much love this week that Felicia realized she had to make a choice and pick just one man. Carly had enough love for Jax that she didn’t want to sign the divorce papers again. Sonny had enough love to wait for both Connie and Kate, regardless of which one returned to him. Emily had enough love to tack on a visit to Nik from beyond. A whole bunch of people loved Robin so much that they resurrected the Nurses’ Ball. The only question fans have now is do Luke and Laura have enough love between them anymore to make it right?

Stories of heartbreak.
Jax just wanted one woman who wasn't involved with Sonny. If that was his goal, why he picked any woman who had ever been with Sonny is a complete mystery. His is the classic heartbreak story. Carly knew it was going to happen, even made a million dollar bet it would happen. Although we knew it was going to happen, it could have been a better reveal. Who wouldn't have liked to see Jax drive by Sonny's after leaving Carly's to find Brenda leaving. The writers made up for that though when Brenda suffered the double-whammy of rejection and Jax walked out on her before the Ball. Maybe he won't be the fallback guy for her either.

Stories of adventure.
What the fans had been waiting for..."For the love of God, just please shoot me if it will shut this shrieking harpy up," said Ethan. He and Luke were ready to take a bullet for Lulu at the hands of Laura. What a tribute to have Luke and Laura facing off with Helena Cassadine again. She was in rare form baiting Laura. We couldn't get enough, well maybe we could. Keeping track of who would have the upper hand was getting old. What happened to the backup that was to accommodate Dante? Helena appeared to have non-stop droves of henchmen reappearing after every shootout. It was almost like the days of old, but somewhat limited having occurred on the Haunted Star. "GH" took it up a notch when Luke shoot and killed Helena. That could only mean that there is an unknown threat out there, perhaps worse than Helena.

Stories that entertain.
The Nurses' Ball is going to be the highlight for viewers in the coming days and after day one, it's apparent we won't be disappointed. The red carpet was a treat featuring Port Charles in a more fashionable light, some of those dresses were divine. It was hard to hear Mac acting like a jerk over a girl, but maybe he got advice from TJ that nice guys don't finish last. The biggest jerk was Brenda. How old are we that we need to start a food fight in the middle of a benefit honoring our dead friend? Between all the entertainment and mini-storylines, we are now on the edge of our seats wondering what happened when Sonny ran off after Brenda, where Jax is, and what is about to happen to Lucy in her dressing room…hope it's not vampire related.

Stories that make a difference.
It is apparent to viewers that "GH" cares. It is apropos that the anniversary centers around the Nurses' Ball in hopes to raise money to further research in the fight against HIV/AIDS. This is not the first time that a storyline has been put forth to raise awareness. It is the first time though that "GH" has partnered with a real life organization (amFAR) to compliment the spirit of the fictional event.

If this golden anniversary has left you smiling, vote in the GH Poll: Quite An Accomplishment to share your favorite current storyline.

Soaps.com has an update on when Marcy Rylan debuts on General Hospital. While waiting for the Connie and Kate integration vote for your favorite multiple personality storyline on Daytime TV.